This little terrier is built on long, low lines, with large, expressive eyes and a very distinctive coat. A silky soft fall of hair on the head, ear feathers trimmed short and the harder body coat clipped short and left longer on the belly and legs, as is typical of many working terriers. 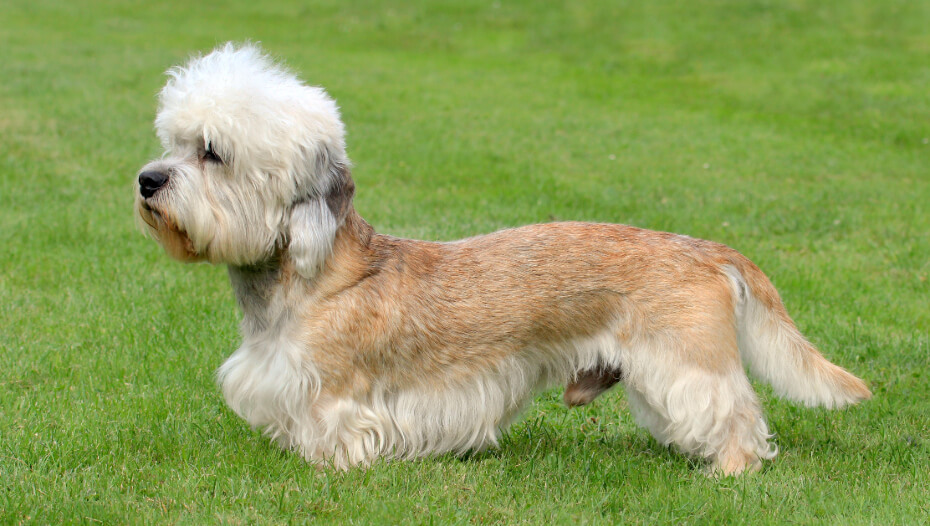 Whilst no longer seen in the hunting field, the Dandie Dinmont retains the typical terrier traits, including a strong desire to hunt, and a tenacious and independent spirit. To their family and friends, they are affectionate, sensitive and devoted, making them an excellent and fun companion and a joy to own and live with. Not as excitable or reactive as some terriers, they are still an active and clever little dog in need of daily exercise and mental stimulation. 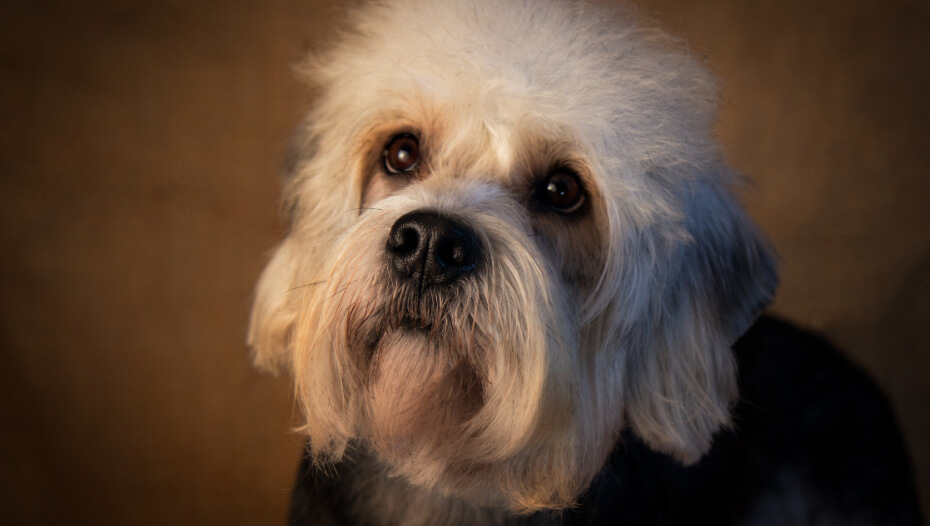 Originally named the Mustard and Pepper Terrier, this is a working terrier developed in the 1600’s to hunt badger, otter and other quarry. In common with many terrier types, the Dandie Dinmont owes its existence to the common pastime amongst sporting men of developing their own specific type. However, the Dandie Dinmont gets its rather unusual name from the novel ‘Guy Mannering’ by Sir Walter Scott. The fictional character ‘Dandie Dinmont’ was based on a real borders’ farmer, James Davidson, who had a pair of this type of terrier named Mustard and Pepper. The fictional Dandie Dinmont was written as owning a pack of terriers named Auld Mustard and Auld Pepper, Young Mustard, Young Pepper, Little Mustard and Little Pepper, and so, despite Sir Scott’s claims to the contrary, there is little doubt who this character was based on. So much so that the real James Davidson’s friends took to teasing him and calling him ‘Dandie Dinmont’ following the novels publication.

As with many breeds the Dandie Dinmont Terrier may suffer hereditary eye disorders, and routine eye testing is advised. Like many small breeds, they can suffer from kneecaps that may temporarily slip out of place (luxating patellas), and their body shape makes them more prone to spinal disorders.

Despite their small size, the Dandie Dinmont requires at least an hour’s exercise per day, plus play and training that engages body and mind. Once that need is met however, they are quite easy going and undemanding to live with. They can enjoy a variety of dog sports, but keep in mind their short legs and long back means they can be easily injured by over extending themselves jumping or tackling steep stairs or slopes and so care must be taken with any activity that involves jumping.

A small dog, they are not demanding to house, but their longer backs and short legs means stairs are to be avoided wherever possible. This would rule out high-rise living or homes with multiple steep staircases, unless they can be kept on one level and carried. A secure garden of a decent size will keep a Dandie happy on days when walks are in short supply, but access to a variety of interesting walking routes is necessary.

Inclined to alert bark to suspicious activity, the Dandie Dinmont will need to be well supervised and trained in a busier, urban home, and may be better suited to a quieter more rural environment or at least somewhere with no close neighbours.

The hair of the Dandie Dinmont is about 5cm long and requires brushing at least twice a week. The coat is hand stripped at least twice a year. Finding a professional groomer who has experience of terrier coats is advised. Check ears and paws for foreign objects after each walk or trip to the garden as Dandies seem to bring a lot of the great outdoors back indoors!

Independent spirited, but loyal and affectionate, the Dandie Dinmont will be a fun challenge to train for those who enjoy working with terriers. Pay careful attention to socialisation with other dogs, cats and livestock, and work hard at training a recall, and of course, the ‘quiet’ cue. As with most terriers, the Dandie’s are a fan of the sound of their own voices if left untrained or unchecked! If motivated, they are capable of a variety of games and sports, and can enjoy scent work, the newer competitive sports of Rally and Hoopers - and digging!

An excellent family dog for those who like walking and training with terriers, but their small size and long back means they are better with older children who can be taught not to pick them up or play rough games with them.