The Kuvasz is a large, powerful breed with a noble expression and appearance. Their thick double coat is pure white, with a slight wave. In mature adults the coat will form a thick mane or ruff on the neck, and long feathering to the backs of the legs and tail. This is a dense, weather-proof coat that insulates the dog well. 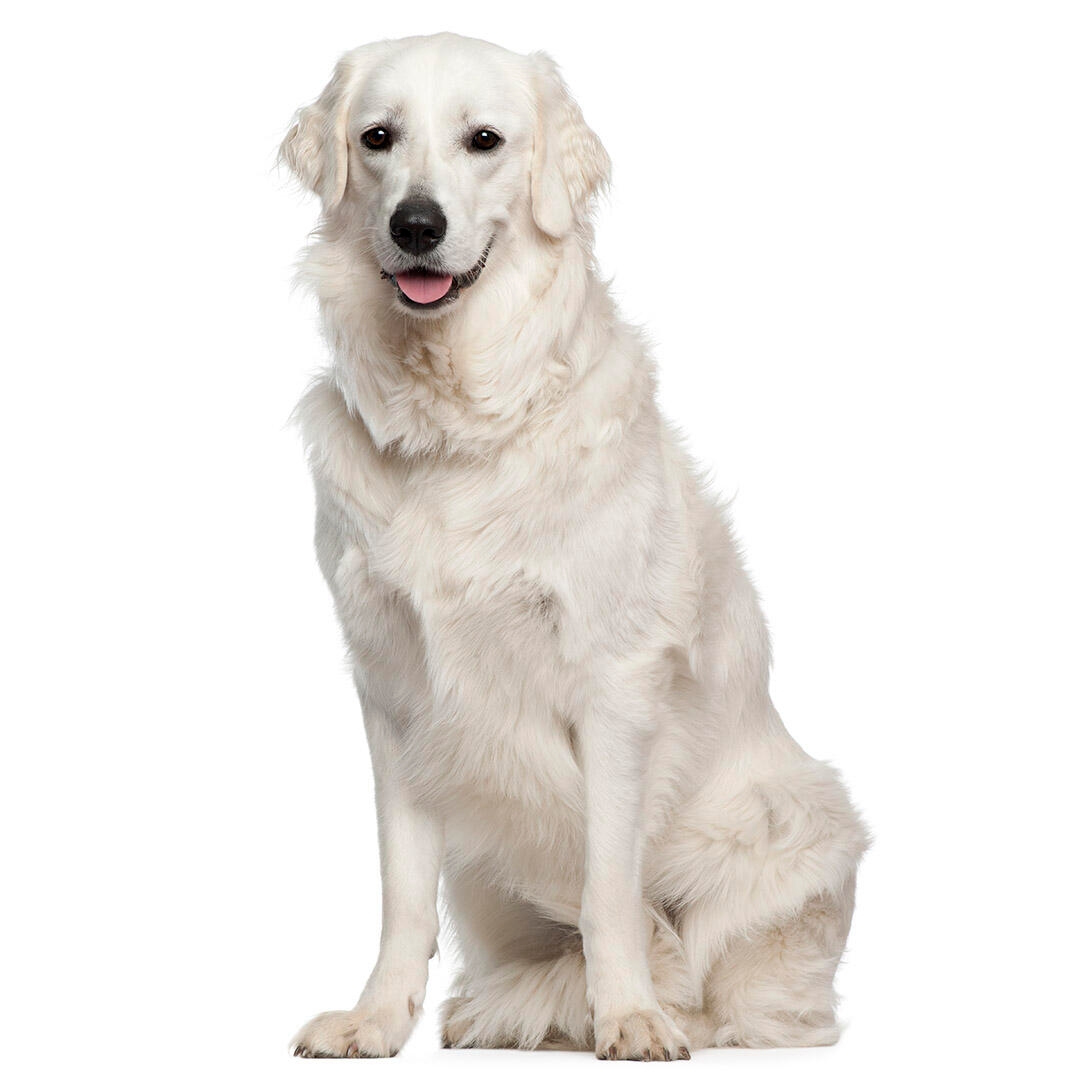 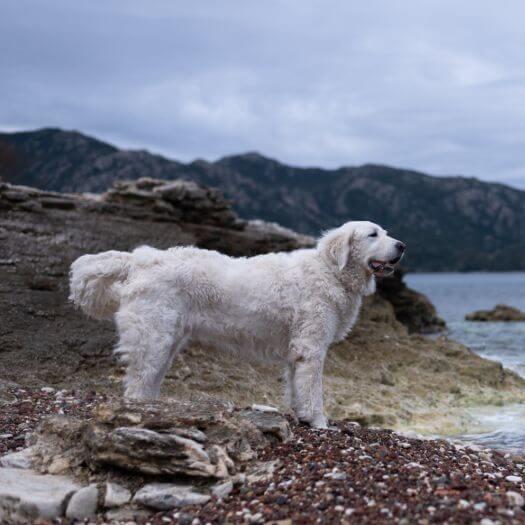 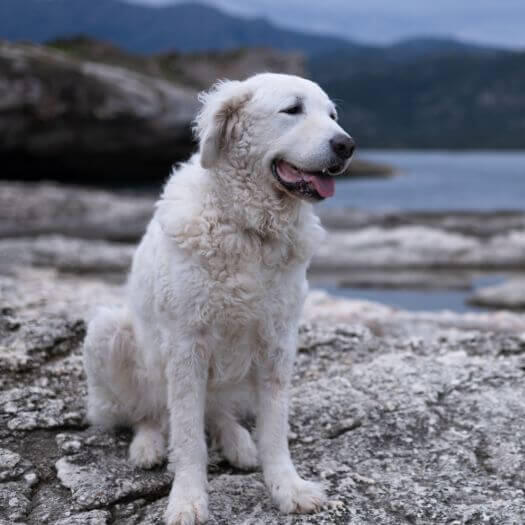 The Kuvasz dog breed is generally robust breed, but they can suffer from:
- Hip dysplasia
- Elbow dysplasia
- Gastric dilatation volvulus

This is a guarding breed, and with that comes independent thought and a willingness to make choices without the input of human owners. Naturally protective around the home, suspicious of strangers and willing to make fast decisions and act on them with voice and teeth, the Kuvasz requires a specialist home. Not inclined to enjoy training for its own sake, hard to motivate and a quick thinker, this is a dog you’ll need to have the right lifestyle for, as they will not easily adapt to unsuitable conditions. This is a breed that can easily get themselves, and you, into trouble if not carefully managed and housed.

Used by the nomadic Magyar peoples to protect flocks both on the move between grazing grounds and when staying at summer and winter settlements, the Hungarian Kuvasz type can be traced back to archaeological skeletal discoveries from the 9th Century. This strong, powerful breed worked in very harsh conditions in the mountainous regions, hence the development of a thick, wind and waterproof coat and their tough nature.

In the 15th Century the breed was made fashionable among nobility by King Matthias Corvinus, who gave Kuvasz pups as royal gifts. The breed’s main role however has remained as a hardworking flock guardian, gentle around sheep but ferocious against predators and strangers.

This is really a specialist dog for a special owner – someone who lives remotely and rurally, doesn’t have visitors and does have livestock that need guarding! Because this breed is designed to live with the flock, they do not bond easily with people and will always think for themselves – serious consideration should be given to owning this breed, even by people who have previous Livestock Guardian Breed experience.

Bred to patrol perimeters and boundaries, guard flocks and drive away any potential predators, this is a large dog that needs to move. Two hours of exercise per day, with training, mental stimulation type games and puzzles on top – no matter what the weather!

Large breed dogs, as well as having large appetites, benefit from a different balance of nutrients including minerals and vitamins compared to smaller-breed dogs. The Kuvasz is prone to bloating and stomach problems; smaller, more frequent meals can help minimise this risk.

This is not a breed that is easily housed – they require a large and extremely well fenced garden, without public footpaths running the other side, or they will be stressed and constantly want to patrol the boundary. A large house with plenty of room for a tall, powerful breed to play, train and dry off after wet walks is necessary. Due to their size, it is recommended they avoid stairs until near maturity, so a home that offers plenty of downstairs living space is best. Not suited to town or city living at all, remote rural homes are vital.

The Kuvasz dog’s coat consists of a woolly undercoat and a coarse top coat. There is a 'mane' of longer, thicker hair around the neck, and longer hair on the backs of the legs and on the tail (up to 15cm in length). The coat should be brushed a couple of times a week, but daily brushing is recommended when the coat sheds, to control the vast quantity of lost hair. Be sure to check paws and ears for debris such as grass seeds after each walk.

Independent minded and quick thinking, the Kuvasz will need some strong persuasion via clever motivation and consistent training to see any reason to work with you. Positive reinforcement is the way forward however you will have to work hard, simply offering food rewards is unlikely to cut the mustard. Up your game using environmental rewards, the opportunity to move, jump, run, chase and play will work well, but a solid bond is necessary, with an owner who has earned their dogs respect over time, or this breed will make decisions for themselves!

A dog for those living in remote places, with large areas of extremely well fenced land. Likely to be fine with older children they have grown up with, as long as they can follow rules. The Kuvasz is not inclined to tolerate strangers at all, and is too large and slow to mature to be a good fit with a home with young children.