The Norwich Terrier, one of the smallest of the terriers, is bright, alert and cheerful with sharply pricked ears and a hard, wiry, weather proof coat. Their faces are described as fox-like, and despite their small size they are a compact and tenacious little dog. 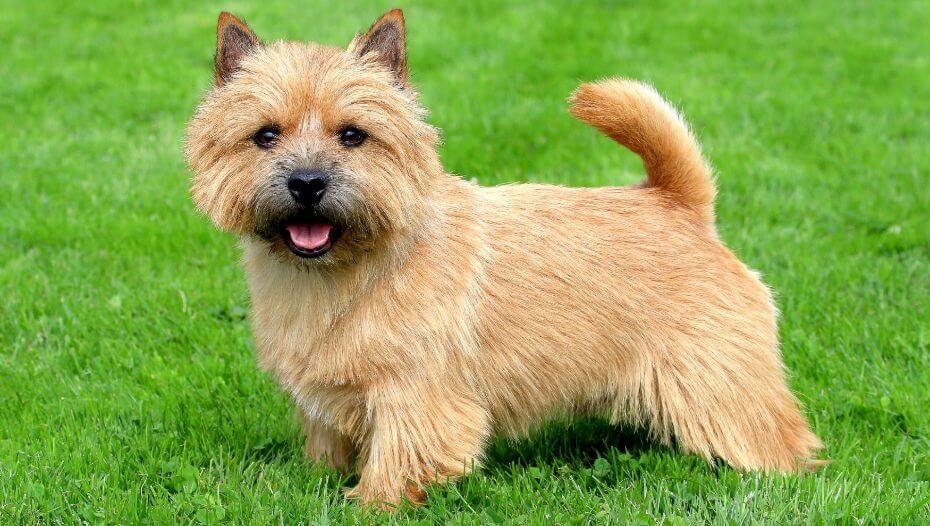 Lively, friendly, active, intelligent, tenacious… despite their small size, the Norwich Terrier is all terrier, and requires plenty of entertainment and activity. In common with other terriers, the Norwich is often thought of as wilful and stubborn, but this is due to their independent nature and quick mind. You have to work hard to get a terrier on-side and working with you, but when you do it is worth the effort.

Early socialisation and training is necessary with cats, small furry pets and livestock, as their original working instinct is a part of the Norwich’s terrier nature. 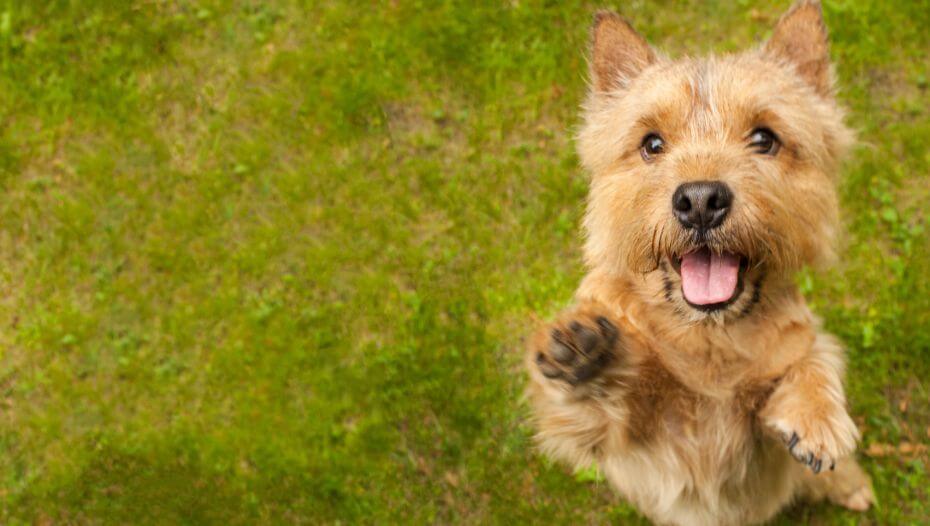 The Norwich Terrier’s origins can be found closely linked to Cambridge University where, in the late 1800s, it became fashionable for some of the undergraduates to own a particular type of terrier that was being bred in a livery stable in Trumpington Street which ran along the back of several of the colleges. These small working terriers were put to work as college ratters, and as the students lived and socialised together, their dogs had to be equally social, and indeed they would often work in a pack. It was one of these dogs, a sandy coloured one called Rags, that is credited with being the founding father of both the Norwich and Norfolk Terriers that we know today.

Until 1964, the drop eared dogs were still classified as Norwich Terriers but after this date, the two were kept separate with the prick-eared dogs retaining the original name.

Like many small breeds, they can suffer from kneecaps that may temporarily slip out of place (luxating patellas) but generally the Norwich Terrier is generally a healthy, hardy dog with few health problems.

The Norwich Terrier requires an hour or more exercise each day, but will happily take more if you are offering it. Ensure a variety of activities, training, games, digging and chasing toys to keep your Norwich Terrier engaged and avoid boredom.

Being small, the Norwich Terrier can live in any sized home, however a secure garden with solid fencing is important as they are agile and more than capable of digging under fencing or squeezing through the smallest of gaps. Alert and vocal, the Norwich Terrier may find city living overwhelming, but suburban, semi-rural and countryside living with access to plenty of walks and secure spaces to run and chase will be ideal.

The hard, wire coat is relatively easy to keep in good condition with a good brush through once or twice a week. The coat will also need to be hand plucked twice a year. A professional groomer or the breeder will be able to give advice on this, and it is easy enough to learn to do yourself at home. A regularly hand stripped or rolled coat is extremely easy to maintain and is weatherproof and sheds dirt easily.

Early socialisation and habituation with children, cats, small furry pets and livestock is vital. The Norwich is a clever little dog and will learn quickly with positive reinforcement-based methods and a good understanding of what makes a terrier tick. Appropriate outlets for chasing, tugging, digging and chewing will meet your Norwich’s needs and keep them happy. Recall training is a must as the Norwich will be keen to chase anything they consider ‘prey’. This is a fun little dog who will enjoy trick training and is capable of mini agility, scent work and more.

Better suited to homes with older children, and quieter homes. The Norwich Terrier is sharp and alert, meaning that the busy home may be over-stimulating, resulting in a stressed and likely noisy dog who cannot settle. Older teenagers who can help with training will enjoy working with this fun little dog.