The Brittany is a medium-sized dog with a cobby, short-coupled and muscular build. They have a lively, friendly expression and an attractive medium length coat that is fine and flat or slightly waved. 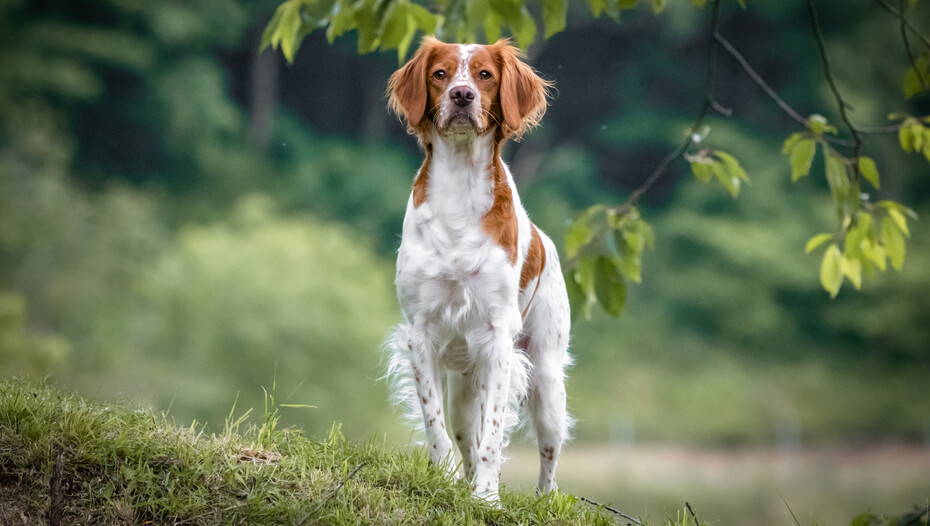 Sociable and affectionate, the Brittany still retains a desire to hunt using sight and scent, and they are a busy, characterful dog with plenty of stamina and speed. Due to their sociable nature with people and other dogs, they make an excellent family dog with the right amount of exercise, training and entertainment, but this is not a dog to leave bored or unfulfilled! 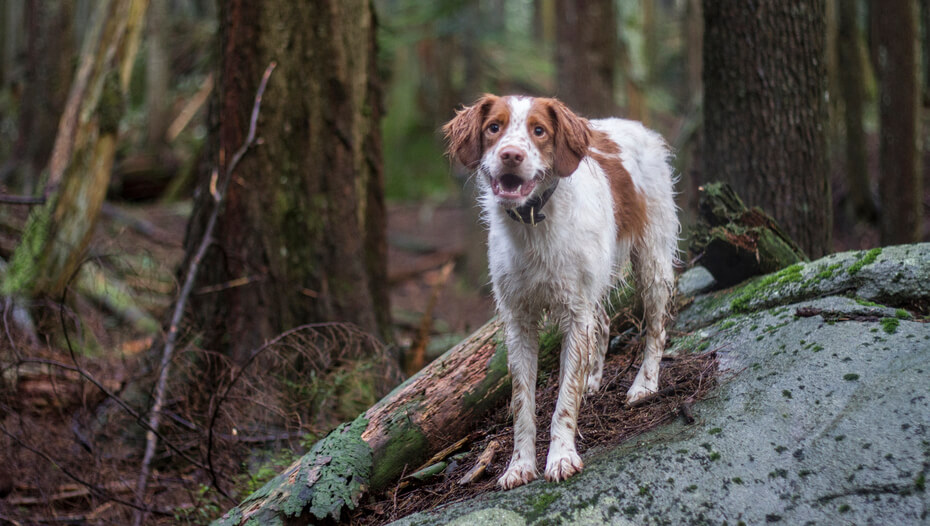 Previously known as the Brittany Spaniel, the Brittany’s origins lie in the pointers, setters and spaniels of Britain and France.

In the Brittany region, the local spaniel and gundog types were mixed with the pointers and setters brought over by British landed gentry, who came for the snipe and partridge season and would leave their dogs in the care of French kennels from one season to the next. The offspring of these became the Brittany Spaniel, but with more influence from setters and pointers, they became longer in the leg and lost the long eared shorter legged spaniel look around the 19th Century.

Still considered a useful HPR (Hunt, Point, Retrieve) breed today, the Brittany was used to fulfil all those functions in the hunting field and this multi-talented breed retained its popularity, eventually entering the show-ring and becoming recognised by the Kennel Club in 1986.

As with many breeds, the Brittany dog (or 'Brittany Spaniel') can suffer from various hereditary eye disorders, and hip dysplasia (a condition that can lead to mobility problems). Eye testing and hip scoring of dogs prior to breeding is therefore important. Epilepsy also occasionally occurs in the breed.

The adult Brittany will need two hours or more per day to include walking, running, retrieving and finding hidden toys – this is a versatile and clever dog with enormous stamina! They need gainful employment in the form of training, games, puzzle solving and plenty of varied and amusing walks. Capable of doing well in a variety of canine sports and activities, from flyball to field trials, man-trailing to agility, the Brittany is a ‘do it all’ sort of dog.

This is not a large dog, but it is an active one, so a rural or suburban home with a large secure garden and plenty of space for training and games is important. Access to a variety of interesting walks where they can follow scent, and secure locations to allow them to run, quarter and play will suit them well. Unlikely to do well in a busy city or town environment.

Your dog's diet needs to have the right balance of all the main nutrient groups including a constant supply of fresh water. It's also important to conduct regular body condition scores to ensure you keep your dog in ideal shape and remember to feed them at least twice daily and in accordance with the feeding guidelines of their particular food.

The medium-length coat is flat or slightly wavy with some longer hair (feathering) on the front legs and more profuse feathering on the back legs. A brush through twice a week should suffice. The ears and paw pads should be inspected weekly and cleaned as necessary.

The Brittany will respond to reward-based training and it is not hard to find things to reward them with. Food goes down well as will retrieval games, scent-based games involving finding hidden toys or even hidden people (man-trailing) as the Brittany will be happy as long as they are engaged, with their person, in some task or other.

Do not leave a Brittany bored however as they don’t fare well left to amuse themselves and nor will your home or furniture!

Pay attention to recall and work hard at teaching them to give, drop or swap items as this breed likes to retrieve and carry objects in their mouth.

With an active, dog-savvy family the Brittany makes a great companion, however they are not suited to sitting around all day and will struggle with a very busy or loud family of small children as that can over-stimulate their sensitive personalities. Older children and teenagers may enjoy being involved in training and exercise with this fun and willing dog.