The English Setter is a large yet elegant breed, symmetrical and substantial in build. Epitomising grace, strength and stamina, their coats are long, flat, silky and well feathered. 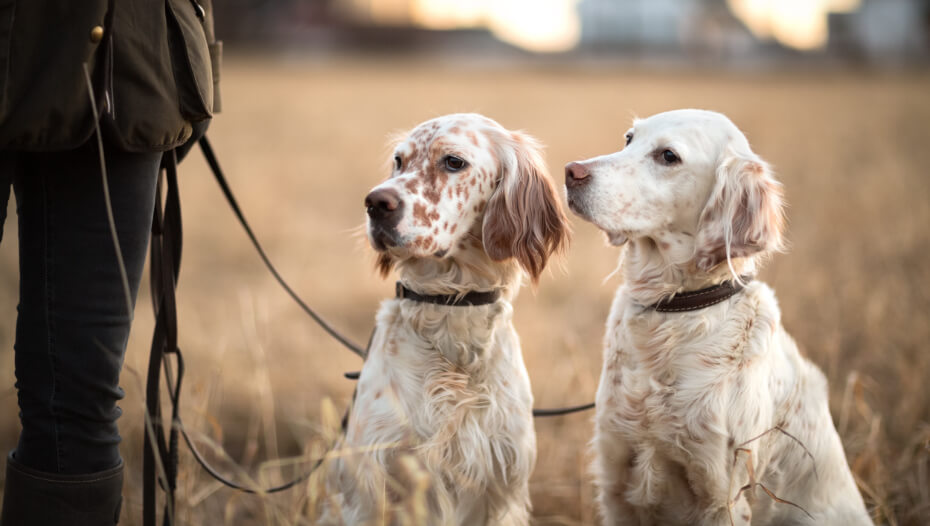 The English Setter is a friendly, amiable natured dog that bonds well with family, though is likely to be a little more reserved with strangers. Less enthusiastic or exuberant than some of the Setter family, they are easy going with other dogs and household pets.

They are slow to mature and care should be taken to socialise and habituate sensitively, and never overwhelm them or take their tolerant nature for granted. 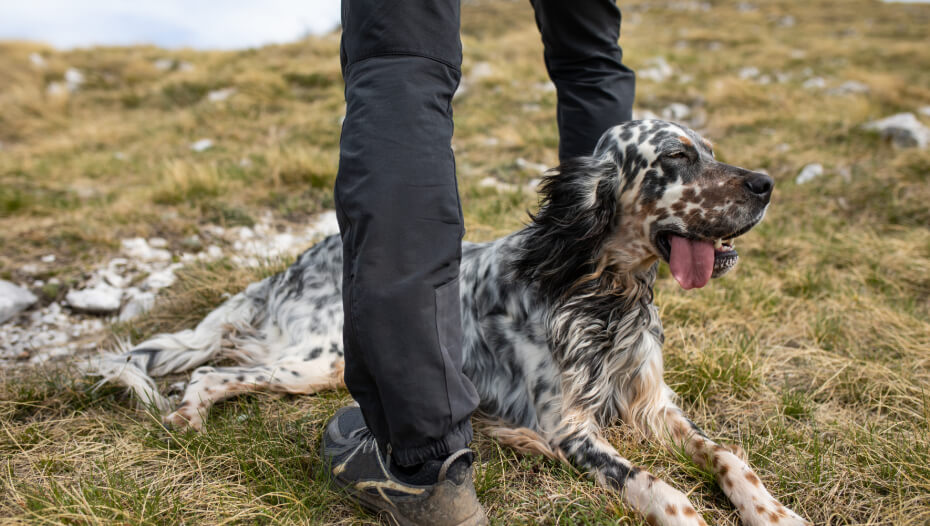 The English Setter’s roots go back to the 1500s, when references to bird dogs that probably resemble the modern English Setter in some way were recorded. There was however, much competition and rivalry between landowners to develop their own specific Setter, and so the exact history is unclear with many variations!

It’s likely the Setters are an offshoot of the various land spaniels brought over from Spain, with the possible addition of water spaniel, pointer and springer spaniel types.

It’s generally agreed that Sir Edward Lavarack was the most instrumental in establishing the English Setter as a distinct and recognised breed.

The English Setters original function was ‘setting’, crouching to indicate where birds were hidden, then either remaining in position whilst nets were thrown, or being asked to move on and push birds into the air to meet the hunter’s hawks (later guns, as falconry fell out of favour).

As with many breeds, the English Setter can suffer from various hereditary eye disorders, and hip dysplasia (a condition that can lead to mobility problems). Eye testing and hip scoring of dogs prior to breeding is therefore important. Deafness may also occur as an inherited disorder and can be tested for from a young age.

Expect plenty of walking with this breed, several hours per day through a variety of country locations – pavement walks are unlikely to keep an English Setter amused for long, and secure space for free running is important.

The English Setter, while not the largest of the setters, is still a large dog, with a long coat that picks up a surprising quantity of mud, muck and leaf litter. A large garden, and moderate to large home are recommended, ideally with space for a wet muddy setter to dry off after walks.

Better suited to countryside or leafy suburbs, this is not a dog that thrives in the town or city.

Large breed dogs, as well as having large appetites, benefit from a different balance of nutrients including minerals and vitamins compared to smaller-breed dogs. The English Setter is prone to bloating and stomach problems; smaller, more frequent meals can help minimise this risk.

English Setters do need a reasonable amount of grooming and trimming to keep them looking at their best. Regular trimming of the hair between their pads and under their ears is a must as air must be allowed into their ears to prevent infections. The feathering will need attention now and again. If showing this breed, considerably more attention will be required.

Patience is the key with any Setter and the English Setter is no exception. The breed is predisposed to be distracted by birds both on the ground and in the air, and plenty of work must be put into building a bond, and on recall. This is not a dog who enjoys repetitive training for its own sake, but owners should try to slip training into every day activities instead, and exercise careful management until training is of a high enough standard that they will come back when called – most of the time!

The more reserved, sensitive nature of the English Setter means this is a dog better suited to families with older children, who enjoy long walks no matter what the weather. When young, the English Setter (particularly males) can be quite boisterous in play and unaware of their size, making them a risk to very small children and sometimes clumsy around very small dogs.

Although patient and tolerant to a degree, the English Setter would prefer a quieter, more mature home.