A rectangular, medium-sized, muscular dog, the Portuguese Water Dog comes in two coat types: one with quite long, wavy hair, and the other with shorter, harsh hair with tighter curls. Show dogs are clipped (on the muzzle, hindquarters and part of the tail). 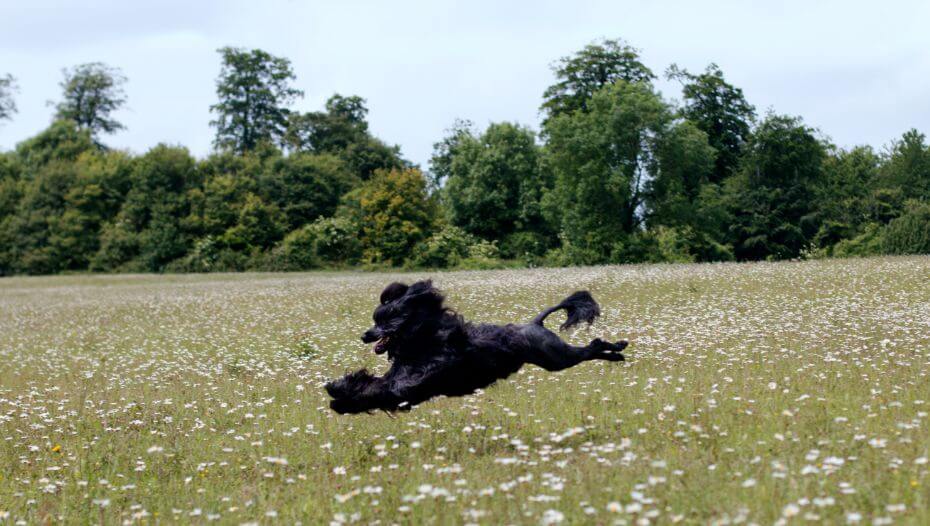 Possibly as a by-product of a history of sitting quietly in boats before leaping into action, the Portuguese Water Dog, while extremely active, is surprisingly self-controlled and very trainable. They are friendly, happy dogs who bond closely to their families and who enjoy being a part of everything - but without training and enough exercise and stimulation they can become bored and unruly. Water is, unsurprisingly, a magnet for them! 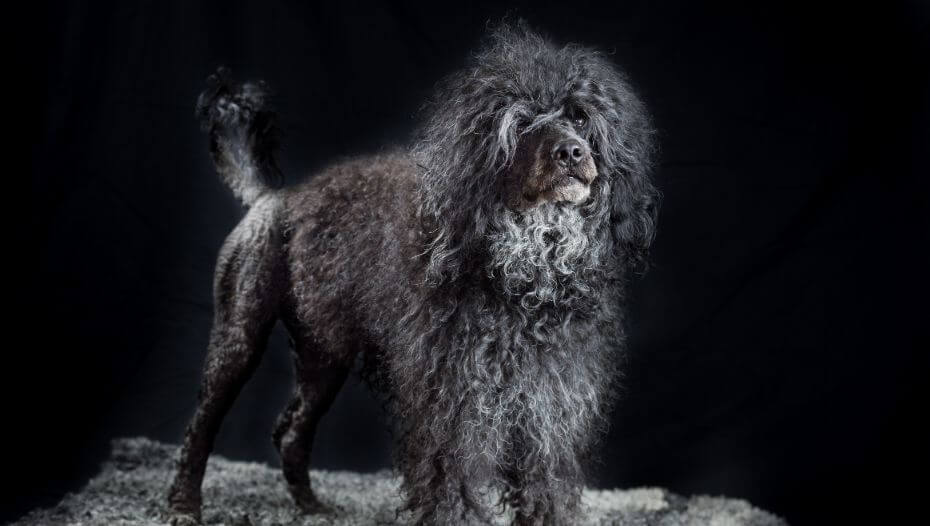 An ancient breed, the Portuguese Water Dog is closely related to the other waterfowl retrieving dogs of Europe but it is not classed as a gundog as its skills were put to very different uses. Instead of being a retriever, the Portuguese Water Dog was very much a fisherman’s friend working alongside their owners on the southern coast of Portugal - and would herd fish, move nets, retrieve escaped fish and would even take messages from boat to boat. With their keen eyesight, they would alert fishermen to shoals of fish in the water and on foggy nights, they would even act as a canine foghorn, barking to alert other boats to their presence.

Advancements in fishing technology however eventually meant that they were no longer needed and by 1960 they were on the verge of extinction with only 50 left. Thankfully a successful campaign was started to save the breed - and by 1984, they were recognised by the American Kennel Club and while still not common, their future seems secure.

As with many breeds, the Portuguese Water Dog can suffer from hereditary eye disorders and hip dysplasia (a condition that can lead to mobility problems). Eye testing and hip scoring of dogs prior to breeding is therefore important. They should also be DNA tested for a rare but serious inherited heart condition that can occur in the breed.

The Portuguese Water Dog needs at least an hour and a half’s daily exercise - to include free-running, exploration and sniffing - but preferably much more. They also need plenty of owner interactions in terms of games, interactive toys and training to keep their busy brains occupied. They are real water babies and so if owners can find a hydrotherapy pool or safe swimming opportunities, they will be in heaven!

While not large dogs, the Portuguese Water Dog does need a lot of exercise, and so need a more rural home or daily access to a variety of open spaces. They appreciate a large garden which will need to be well fenced.

Your dog's diet needs to have the right balance of all the main nutrient groups including a constant supply of fresh water. It's also important to conduct regular body condition scores to ensure you keep your dog in ideal shape and remember to feed them at least twice daily and in accordance with the feeding guidelines of their particular food.

As already described, there are two hair types in the Portuguese Water Dog breed. Both need regular grooming and, if you want to keep the dog in show trim, regular clipping. Many pet dogs are clipped all over in a 'puppy' type trim. The breeder will advise you on the full details of grooming when you purchase the puppy, or you can use the services of a professional groomer, of course, although the additional, regular expense will have to be considered.

The Portuguese Water Dog is a smart, intelligent breed who is quick to learn and can easily become the star of any training class - however like many clever dogs, owners need to find ways to motivate them using reward-based methods and by keeping training enjoyable as they have an independent streak and a low boredom threshold that can lead them to going ‘self-employed’ (especially near water!).

With their friendly, self-controlled, gentle nature, the Portuguese Water Dog makes an ideal companion for an active family - and will happily get on with other animals if introduced to them at an early age.