The Cornish Rex is a medium sized cat with a lean, athletic build, and striking wedge-shaped head with large mobile ears. The prominent feature of the breed however is their ‘rex’ coat, which is curled, waved or rippled across the whole of the cat, even the whiskers and eyebrows should be curly. This curious looking coat should be silky to touch, and in the mature cat is dense and short, though it may take 3 years for a Cornish Rex to develop a fully matured coat. 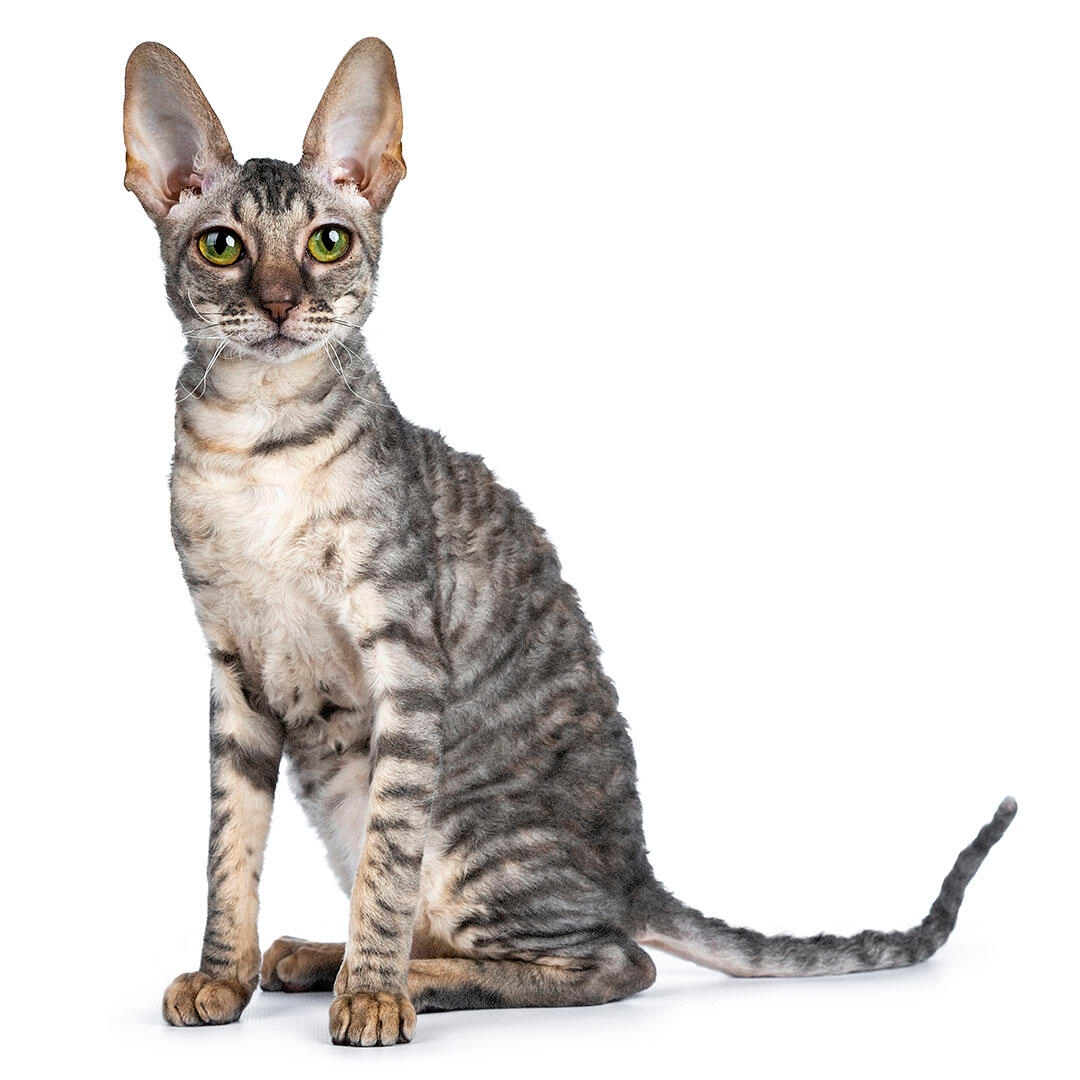 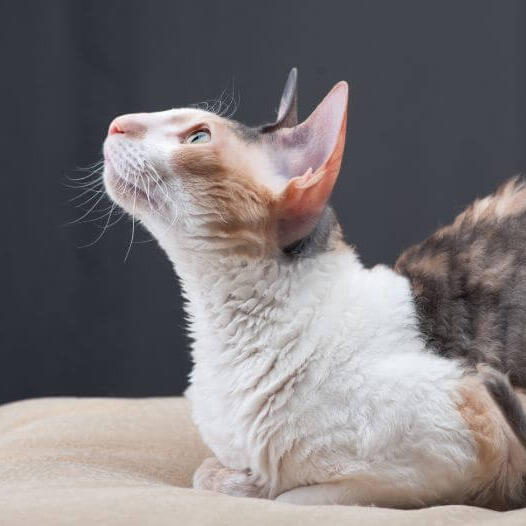 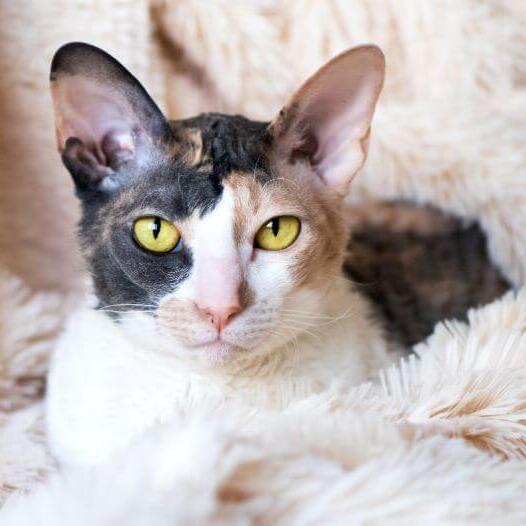 The Cornish Rex breed is prone to:
- Hypotrichosis which is a condition where areas of fur do not grow and this can result in skin infections (particularly yeast infections) due to the lack of oil which is normally produced by the hair in order to maintain healthy skin.
- Polycystic kidney disease which is an inherited condition where cysts form in the kidneys. This affects kidney function and can eventually lead to kidney failure. However, it is worth noting that the risk of developing this disease in this breed is lower than in other cat breeds that are prone to the problem.
- Progressive retinal atrophy which is an inherited disorder where part of the eye degenerates and wastes away which can result in blindness.

Testing available:
- DNA testing for polycystic kidney disease and progressive retinal atrophy which tests whether or not a cat has the potential to be affected by this condition.

Playful and kittenish into old age, the Cornish Rex has been described as the Greyhound of the cat world. Lean and athletic, with a characteristic galloping run, it is easy to see how this comparison can be drawn. Cornish Rex’s are clever, adventurous and extremely curious. They are also highly sociable with both people and other household pets.

Arising from a random genetic mutation said to have occurred in a litter of non-pedigree cats born in Cornwall in 1950, the Cornish Rex has been selectively bred by crossing that first kitten back to his mother, and subsequently careful line-breeding with some out-crossing to Siamese type cats. This produced the lean, elegant cat, with a distinctive rippled or curled coat we know as the Cornish Rex.

There are several genes that create ‘rex’ cats, and in all four of the original ‘rex’ breeds (Cornish Rex, Devon Rex, LaPerm and Selkirk Rex), these are different genes and different mutations.

The Cornish Rex has no guard hair, and no awn (fluff), just a fine curled undercoat, and although popularly believed to be hypo-allergenic, this is rarely the case as allergies are typically triggered by saliva (caused by the cat grooming itself) and dander (dead skin cells).

The Cornish Rex is cat who could go outdoors, if only the outdoor world were always warm, dry and safe. Their fine coat means they are not remotely waterproof and they will get cold in wet or windy weather. Their highly curious and friendly nature unfortunately means they will get themselves into trouble with your neighbours, will appeal to thieves and could easily get themselves into a delivery van or car and become accidental hitchhikers.

Secure your garden using rollers or mesh, or provide an enclosed cat-run to give them some safe outdoor time. Check out the rest of our tips for a cat-proofed garden.

The Cornish Rex does require a great deal of entertainment to be supplied by you! Build extensive cat trees, wall-runs, climbing frames and jungle-gyms, or expect your furniture to be used as such! Here are a few useful ways to stop your cat from scratching the furniture.

Feeding from puzzle toys and other food dispensing cat toys that simulate hunting and killing prey will help keep your Cornish Rex amused and satisfied. They can even be taught to fetch and could be trained using clicker training to perform a variety of tricks!

Every cat is unique and each has their own particular likes, dislikes, and needs when it comes to food. However, cats are carnivores and every cat must obtain 41 different and specific nutrients from their food. The proportion of these nutrients will vary depending on age, lifestyle and overall health, so it's not surprising that a growing, energetic kitten needs a different balance of nutrients in her diet than a less active senior cat. Other considerations to bear in mind are feeding the right quantity of food to maintain 'ideal body condition' in accordance with feeding guidelines and catering to individual preference regarding wet or dry cat food recipes. Find out more about cat feeding guidelines with our article.

The Cornish Rex cat's wavy coat needs the minimum amount of care and cat grooming. Rubber brushes may be used to help remove dead hair, but caution should be exercised as excess use may permanently damage the hair. Cats with pale coats may need sun block on ears in the summer months.

Remember that a greasy coat can be evidence that your cat is no longer attempting to groom themselves, which can be indicative of poor or failing health. As with all cats, Cornish Rex benefit from regular vaccination, parasite control and an annual veterinary cat health check.

The Cornish Rex would suit the adult family home or those with older children who can respect a cat’s space. Not suited to homes that are extremely busy, or owners who are absent for long periods each day.