The first impression of a Devon Rex cat is of an impish face and a crinkly coat. The cheeks are wide, the eyes and ears are very large, and set low on the head. The short coat has guard hairs that are wavy but is mostly made up of the undercoat of down hairs. The Devon Rex cat has the characteristic Rex 'Marcel wave', and the fur forms ripples and waves, particularly on the back. The whiskers and eyebrows also curl. The Devon Rex cat breed can be any coat colour or pattern. 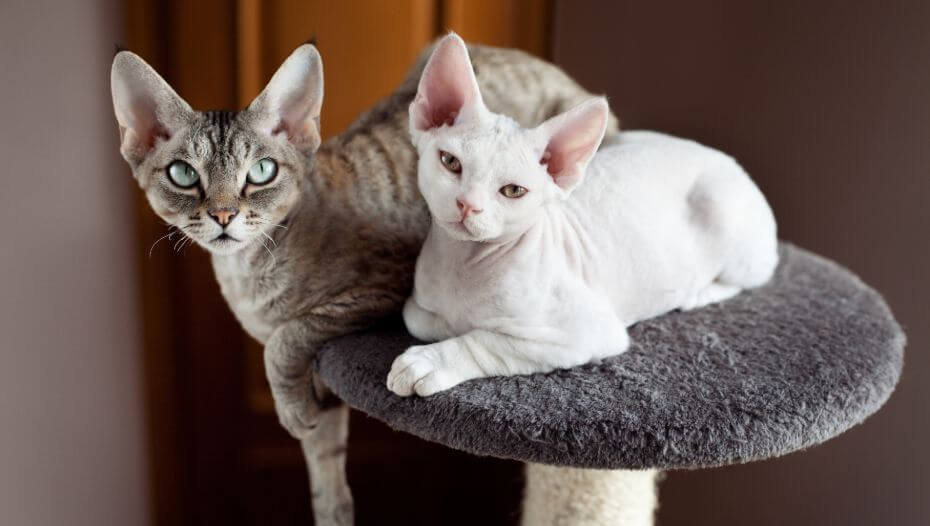 Devon Rex cats are fondly described as 'little terrors' and 'monkeys in cats' clothing' with antics such as swinging from the curtains and climbing the wallpaper! They are lively and extrovert cats. They have several 'dog-like' qualities, such as a fondness for fetching toys, and can be trained to walk on a harness and lead. They are very gentle and loving cats, and hate to be bored or alone. Visitors to the house may be surprised to find that they are thoroughly investigated by a nosy Devon Rex cat before they have a chance to sit down! 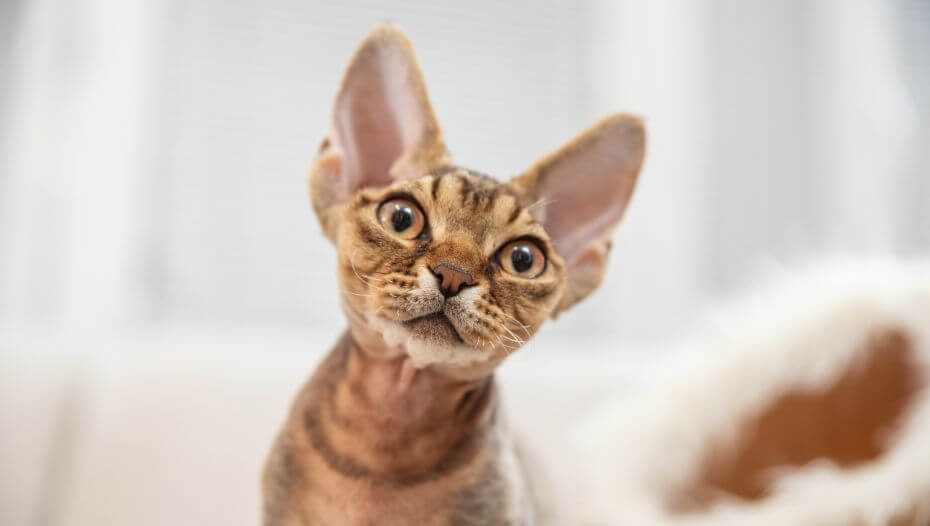 The Devon Rex cat breed stems from a curly-coated cat found in Devon in 1960. Like the Cornish Rex cat breed, the Devon cat's coat is caused by a recessive gene, and inbreeding was necessary to perpetuate the breed. The Devon cat gene is, however, different to that which curls the coat of the Cornish Rex, and crossing Devon Rex cats and Cornish Rex cats produces litters of straight-coated kittens. The two mutations must have arisen independently, despite arising so close geographically, ie, in Devon and Cornwall. Within 10 years of discovery, the breed was recognised in Britain.

Because of the nature of its coat, the Devon Rex cat can be prone to yeast infections of the skin that can cause ear problems, greasy deposits on the skin and itching. Rexes can also be prone to baldness, a disorder known as hypotrichosis. Because of the back-crossing needed to establish the breed's initial gene pool, there have in the past been genetic spasticity problems associated with the breed (known as Devon Rex myopathy), but careful breeding has all but eliminated this now.

The Devon Rex's wavy coat needs the minimum amount of care. Rubber brushes may be used to help remove dead hair, but caution should be exercised as excess use may permanently damage the hair. Devon Rex cats need to have their ears cleaned regularly to remove waxy deposits that may lead to ear infection. Cats with paler coat colours may require sun block on the ears in the summer months. As with all cats, regular vaccination and parasite control is recommended.

While this breed is not widely recognised as one of the best breeds for children, all cats are different and with the proper familiarisation may still be able to live with children.