The Snowshoe is a strikingly handsome cat that combines the heftiness and solidity of the American Shorthair, with the elegance and lithe lines of the Siamese.

Their head is rounded, with large slanting eyes and wide set ears. Long and athletic in the body, the Snowshoe has neat, oval paws and a moderate length tail. The overall picture is a medium sized cat that is well balanced physically, and built to run and jump. 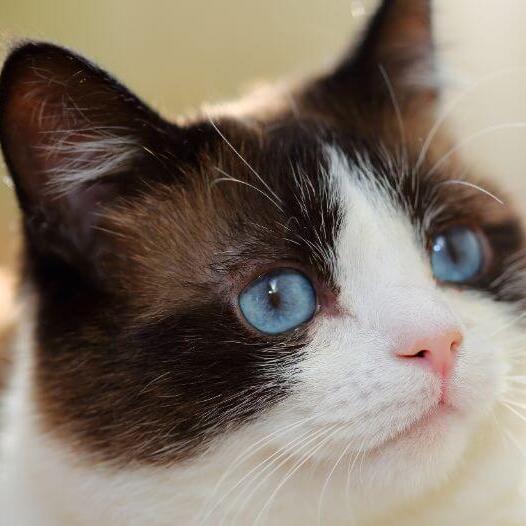 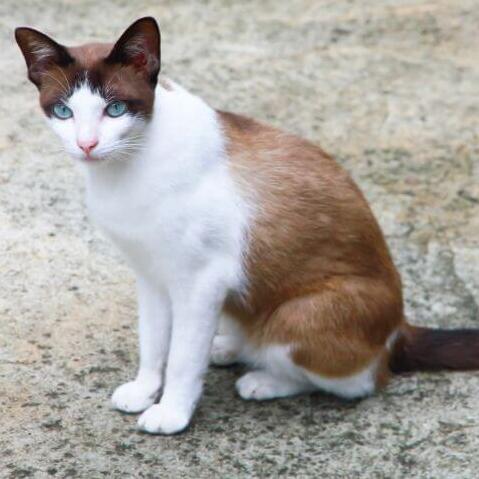 The Snowshoe cat breed can suffer from:
- Polycystic kidney disease which is an inherited condition where cysts form in the kidneys. This affects kidney function and can eventually lead to kidney failure. However, it is worth noting that the risk of developing this disease in this breed is lower than in other cat breeds that are prone to the problem.

Testing available:
- DNA testing for polycystic kidney disease which tests whether or not a cat has the potential to be affected by this condition.

As you would expect from a cat whose ancestry is partly Siamese (and they are regularly crossed back to Siamese to retain these lines), the Snowshoe is edging toward the more extreme ‘chaos’ end of the cat personality scale. Less demanding and softer in voice than the Siamese, but still chatty and chirrupy, the Snowshoe can form strong bonds with owners, and be quite a bossy cat.

They are inclined to be inquisitive and curious, sometimes to the point of danger, though typically clever enough to get themselves out of trouble (however your ornaments may not survive!). Some are more friendly, some are loners, some take on a rather ‘care-giver’ role with their people – but however your Snowshoe turns out, they are certainly not a boring cat!

The Snowshoe was developed in the early 1960’s by an American breeder who found three kittens in a Siamese litter, who all had white feet. Finding this an attractive look, she set out to create a breed that combined the Siamese elegance and pointed colouration, with the white tuxedo markings found in other breeds. She used the American Shorthair as the other half of this creation, with their more solid build rounding out the rather extreme Siamese shape. Interest in the breed came and went, and records were not kept well, but by 1989 there were around 30 breeders in the US and The International Cat Association accepted them with Champion status in 1994.

Some secure outdoor space, either in the form of a fully secured garden or a purpose-built cat run will be beneficial to their physical and mental health. Fresh air and sunshine are good for all cats and the Snowshoe is no exception. If this can be provided so that the cat has free access via a cat flap, even better, but this is no substitute for a human companion. Fill your cat run with platforms, branches, tunnels and toys and the Snowshoe will entertain themselves much of the time, but they do need your company.

The Snowshoe and delicate ornaments and knick-knackery do not go well together – clear the decks, provide plenty of climbing space, high up sleeping platforms and observation towers and still expect items kept on shelves to succumb to the forces of gravity quite often.

The more appropriate outlets for climbing and resting on high objects, the better, the Snowshoe likes altitude. They also love a game, a cuddle and a fuss, and will enjoy finding food dispensing puzzle toys and hidden snacks. Some will enjoy games with ‘things on strings’ others will look at you with disdain – see what your Snowshoe enjoys, and provide for that need, they will let you know in no uncertain terms!

Every cat is unique and each has their own particular likes, dislikes, and needs when it comes to food. However, cats are carnivores and every cat must obtain 41 different and specific nutrients from their food. The proportion of these nutrients will vary depending on age, lifestyle and overall health, so it's not surprising that a growing, energetic kitten needs a different balance of nutrients in their diet than a less active senior cat. Other considerations to bear in mind are feeding the right quantity of food to maintain 'ideal body condition' in accordance with feeding guidelines and catering to individual preference regarding wet or dry food recipes.

The Snowshoe will groom themselves well, but a weekly brush to bond, check for parasites and remove dead coat is common sense.

Best suited for the quieter home that understands a cat’s needs and has time to meet them. Fine with older children who can respect a cat’s space, but probably a little too sensitive for the very busy, loud or frantic households, or those with many young visitors.