Basset Hounds are substantial dogs on short legs. From the scent hound group, this breed was originally used for hunting small game but are now popular as family dogs due to their relaxed and affectionate demeanours. 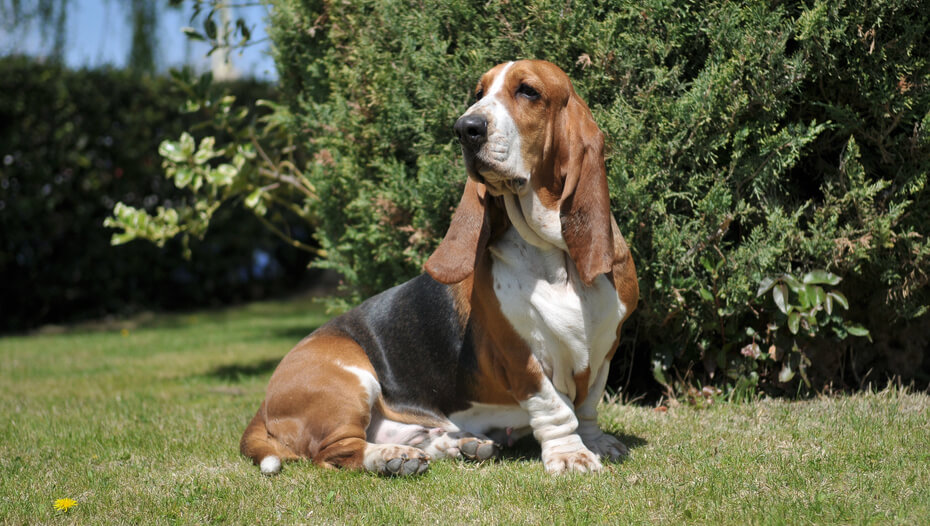 Despite looking morose and serious, the Basset Hound dog breed is sociable, calm, polite and quietly playful. Affectionate with people they know and reserved with others, they love children and get on well with other dogs and with some training, other animals in the home. They are very companionable dogs who hate to be left alone and so always need some company - whether human or canine. 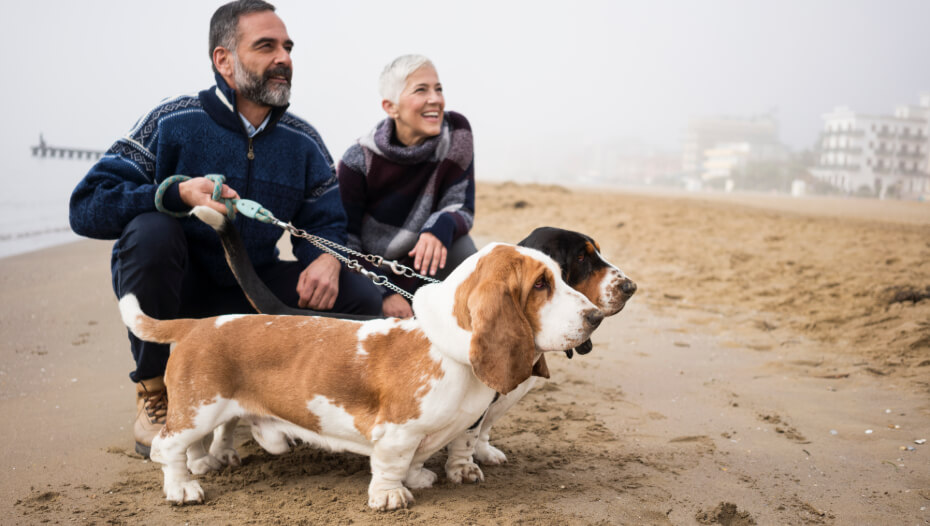 The Basset Hound originated in France where they were used to hunt rabbit, hare and wild boar, and the name ‘basset’ translates to ‘short’ or ‘low’.

Their history is somewhat accidental coming from short-legged mutations appearing in traditional scent hound breeds. Rather than rejecting these dogs, it became clear that they were useful for hunters who were following dogs on foot rather than horseback and couldn’t move as fast. Often this was because there was heavy cover where horses couldn’t go or else poverty following the French Revolution meant that many people could no longer afford horses.

The Basset Hound came to England in 1866 where it was crossed with the Bloodhound to give a heavier bodied version than the original French dog - and this is the Basset Hound we see today.

The most common health problems seen in the Bassett Hound are related to their body shape. They are prone to spinal disorders and abnormal joint development, particularly of the elbows, and obesity can make these disorders more problematic. They are also predisposed to ear and skin infections, as well as various eye conditions and so should be regularly assessed for these.

About an hour's daily exercise is needed. Basset Hounds can tend to be lazy if given half a chance, but they do need exercise to ensure they do not put on too much weight, which can cause back problems in later life. During the rapid growth periods, however, exercise must be limited as joint complications may occur. Because of the length of their bodies, Bassets should not be allowed to go up and down stairs until they are 18 months old.

As well as walking exercise, regular/daily scent work enrichment is a real joy for these dogs.

The Basset Hound is very much a country dog as, while they don’t need a huge amount of exercise, they do need daily country walks where they can get to use their incredible nose. Much of the joy of exercise for a Basset Hound is following scents and sniffing - so owners need to be able to indulge them in that and enjoy watching them, and not get frustrated. They enjoy having their own garden to wander around and sniff in too. Given their joy of howling, it’s best if you don’t have close neighbours!

Your dog's diet needs to have the right balance of all the main nutrient groups including a constant supply of fresh water. It's also important to conduct regular body condition scores to ensure you keep your dog in ideal shape and remember to feed them at least twice daily and in accordance with the feeding guidelines of their particular food. The deep-chested Basset is prone to bloating and stomach problems; smaller, more frequent meals can help minimise this risk.

The short, smooth coat requires little grooming – a quick brush over once a week is all that is usually required. The folds of the skin, eyes and long ears should be checked and cleaned (and thoroughly dried) every other day to prevent potential problems arising.

The Basset Hound looks on training with some amusement and largely feels it is a pointless exercise. As they tend to go deaf when they find a great scent, training them to walk on a harness and lead is important as once in the great outdoors their recall is likely to be less than reliable, no matter how much time you spend training.

The Basset Hound excels is in scent work so find a training class that will help you explore and celebrate your dog’s strengths and never focus on their training failings.

Separation related problems can be an issue if they are left alone without company.

Basset Hounds make wonderful family dogs as they are kind and patient as well as being friendly to all. It is important however that children are taught not to take advantage of this good nature.