The Borador is an outgoing mixed breed dog that’s a combination of the Labrador Retriever and the Border Collie. They’re becoming popular amongst active owners looking for an energetic and curious dog that combines the kindly natures of both breeds.

The Borador can be a first cross (with one Labrador and one Collie parent) or they can be bred back to one of the original breeds or be two Boradors bred together - so there are varieties in size, shape, coat types and temperaments. 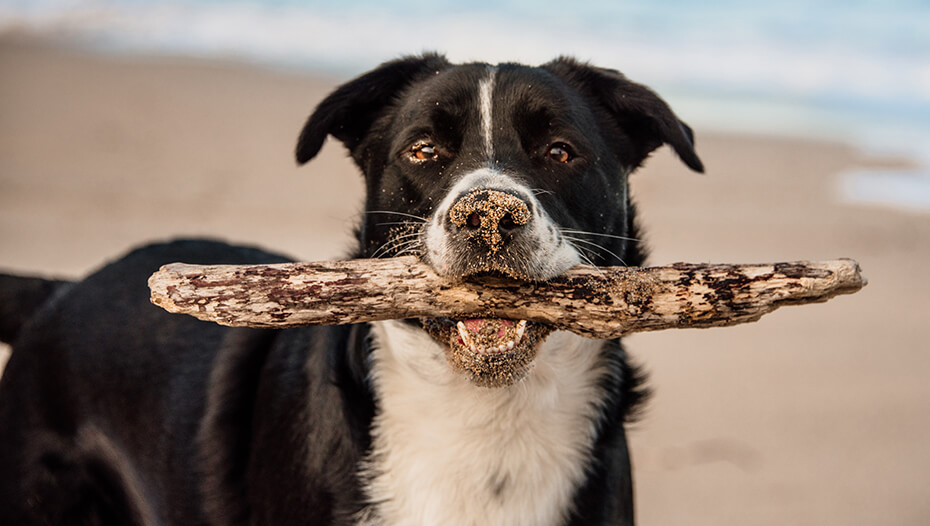 Like most crossbreeds, the personality of a Borador depends on the parents and how they have been bred and reared.

The Borador can have a personality that’s a cross between the two and so may inherit the retrieving instinct or may inherit the herding instinct, or indeed they could inherit both. It’s clear from looking at the two breeds that make up the Borador that this is an extremely active dog who needs a lot of exercise, training and input (often more than most owners will be able to provide).

The personality of a Borador seems to be more consistent when they are first crosses (F1). As a line is successively bred, they can be either bred back to one of the original breeds (and so strengthen either the Labrador or the Border Collie personalities) or else be bred to another Borador - in which case there is less predictability in temperament (and in-breeding becomes more of a potential issue).

The Borador is a combination of two of the best loved, and more successful, working breeds. This is a high energy dog that will need a lot of training and a lot of exercise. Where its likely that the breed has existed naturally for many a year, the intentional breeding of the Borador began in the early 2000s. The aim of the breeders was to create a breed that’s extremely smart and family friendly and so, the Border Collie and Labrador Retriever were selected.

To understand more about the origin of the breed requires an understanding of the two breeds that go into the formation of the Borador. The Labrador Retriever breed originated not in Labrador, but on the coast of Newfoundland in the 17th century. They were trained to bring in the fishing-nets through the icy waters for the fishermen and, in the early 19th century, were brought to Poole Harbour in Great Britain. They were so attractive and with such appealing personalities that the fishermen had umpteen offers from Englishmen to buy them. The breed, with their strong working abilities, was instantly successful as a gundog. The Earl of Malmesbury became fascinated by these dogs, known at that time as Saint John’s Dogs, and he started breeding them, calling them Labrador Dogs. Today, Labradors are still used as working gundogs as well as being beloved family pets.

The Border Collie dog breed dates back to the 1700s, although it was not given its present name until 1915 being previously known as the Scottish Collie or the Working Collie. There are several theories as to where the word ‘Collie’ comes from, but the most likely is that ‘collie’ means ‘useful’ in Gaelic, and these dogs are very certainly that.

Border Collies worked with shepherds in the border area between Scotland and England for hundreds of years, being bred purely for their working ability and quite rightly earning themselves the reputation of being the finest herders of sheep in the world. The Border Collie works silently and has a unique way of moving sheep, working in harmony with their owner using a combination of crouching, creeping and sprinting that allows them to be very precise in how and where they move their woolly charges. These behaviours have translated well to many of the modern dog sports.

The Borador can have any combination of the two breeds in their appearance, behaviour and temperament - but they will be hard working dogs with plenty of energy and stamina.

Labrador Retriever - eye tests and hip and elbow scoring should be done, and there are several DNA tests that should also be done.

Information on DNA health tests for both breeds can be found on the Kennel Club’s website.

Both the breeds that make up the Borador are highly active and enjoy exercise and will be happy with two hours plus every day - but will still enjoy games, training, interactive toys and being involved in all family activities at the rest of the time too.

The Borador is a very active dog that needs a good-sized living space - plus they are very active and will appreciate a large garden and access to the great outdoors for the long walks they will need.

Large breed dogs, as well as having large appetites, benefit from a different balance of nutrients including minerals and vitamins compared to smaller-breed dogs. Boradors like most larger breed dogs can be prone to bloating and stomach problems; smaller, more frequent meals can help minimise this risk.

The Borador will have a fairly low maintenance coat, although it will shed. Whether it sheds short hairs like the Labrador or clumps of longer hairs like the Collie will depend what hair type they inherit. If they have a Border Collie coat, mats around the ears and inside of thighs should be watched out for.

Due to their intelligence, this is an easy dog to train – but potential owners definitely shouldn’t mistake ‘easy to train’ for naturally well behaved! By nature, the Border Collie is a relentless herder, and so will try and round up children, other pets and indeed anything and everything they can find, while the Labrador is a working retriever who will need an outlet for this working behaviour.

A Borador who is not given a suitable outlet for their passion for work can resort to destructive behaviour, nuisance barking and hyperactivity.

This is a very active dog who is smart and busy and who will need training if you want any hopes of a quiet life! They are a joy to train as both breeds are intelligent and love working with their owner, but they will learn bad habits as quickly as good ones, so reward-based training should start early and be ongoing. Boradors are a great breed for dog sports such as agility or even gundog work and will love having an active job to do.

Given they have a working background, they should be well socialised with cats (who they can learn to live with happily), but they should be watched with caution around other small animals and birds.

If the Borador is sourced from a reliable breeder, and is well-trained from puppyhood and well exercised, they will make fabulous family dogs. An untrained or bored Borador can however easily become unruly and overly boisterous.