The Labradoodle is one of the more established crossbreeds, so if you want to add one to the family, you’ll be happy to know it’s fairly easy to find reputable breeders. The breeds that make up the Labradoodle are the Labrador Retriever (show type or working) and the Standard Poodle (or sometimes the Miniature Poodle).

The representatives of this crossbreed can vary in size, shape, coat types and temperaments, depending on how they have been bred. The Labradoodle can be a first cross (with one Labrador and one Poodle parent, they can be bred back to one of the original breeds or be two Labradoodles bred together.

There are breed clubs set up and run by dedicated people who would like to see the Labradoodle become a recognised breed. So make sure you look out for those breeders that breed them responsibly and ensure all parents are health tested. 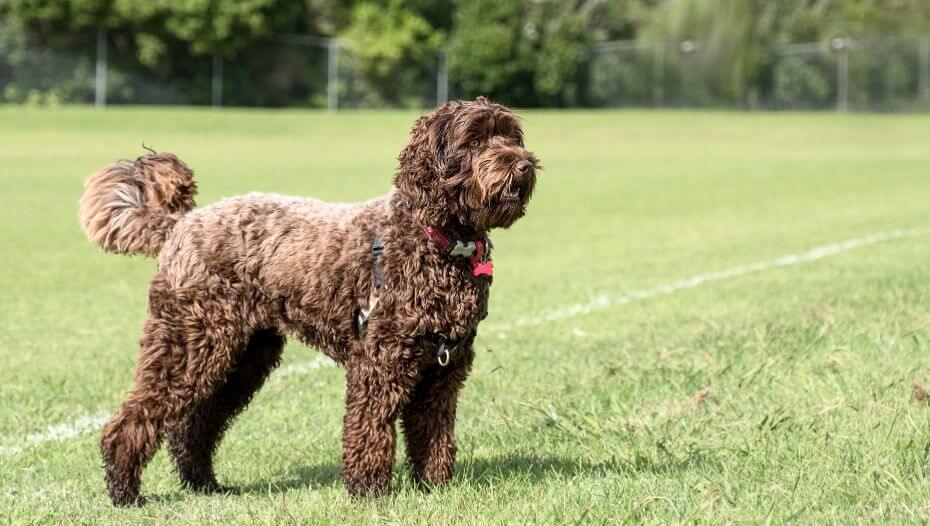 Like most crossbreeds, the personality of a Labradoodle depends on the parents and how they have been bred and reared.

The Labrador Retriever is an active, friendly, loving dog who thrives on human companionship, wanting nothing more than to please their owners (except perhaps eat and jump in any water they can find!). They are ideal pets where there are children about and they get on well with other household animals. Labradors are a very happy breed, extremely affectionate, constantly wagging their tails and always on the go. They are easily trained, being eager to learn and to please and can turn their paw to just about anything. They are total foodies however - which helps with their training but not their waistlines! 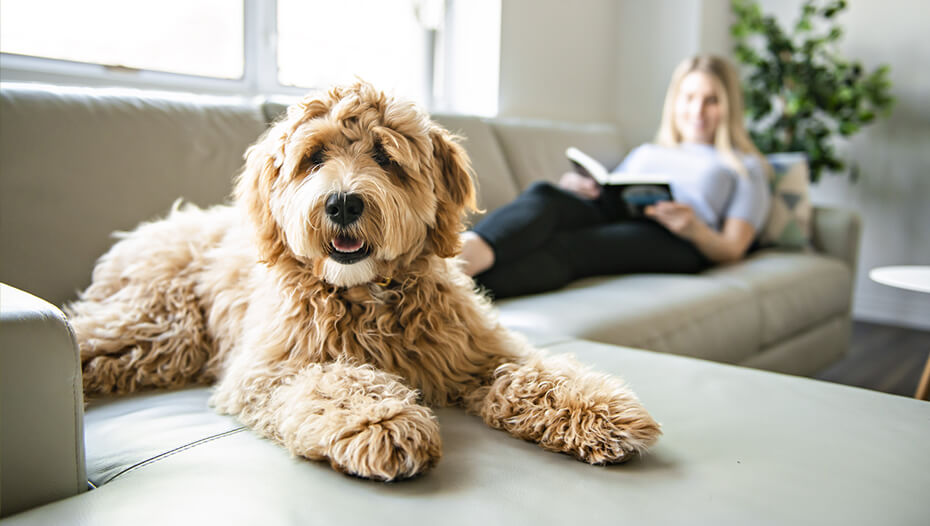 The Labradoodle is one of the best-known and established of the ‘designer crossbreeds’. It originated in Australia in the 1970s when the Australian Guide Dog Association received an enquiry from a lady in Hawaii requesting a Guide Dog that wouldn’t cause her allergies to flare up. She chose Australia because the animal health arrangements meant that a dog bred there could come straight into her home in Hawaii without having to spend time in quarantine.

The Association were already using Labradors as guide dogs, and so they needed to cross one with a non-shedding breed. They imported a white Standard Poodle from Sweden that had excellent working bloodlines - and the first (intentional) Labradoodle litter was born.

Since then they have been bred - both responsibly and irresponsibly - in the quest to find a friendly, non-shedding family dog. This has been done with varying degrees of success - and indeed some Labradooodles have excelled as assistance dogs around the world, and those who are enamoured of them hail them as the perfect large companion dog (as long as they get enough exercise!).

While there are breed clubs in the UK and all over the world, the Labradoodle currently isn’t recognised by any international kennel clubs.

The two breeds that go into the formation of the Labradoodle are the Labrador Retriever and the Standard Poodle.

The Labrador Retriever breed originated not in Labrador, but on the coast of Newfoundland in the 17th century. They were trained to bring in the fishing nets through the icy waters for the fishermen and, in the early 19th century, were brought to Poole Harbour in Great Britain. Due to their lovely personality the fishermen started getting offers from Englishmen to buy them. The breed also had working abilities which made them instantly successful as a gundog. The Earl of Malmesbury became fascinated by these dogs, known at that time as Saint John's Dogs, and he started breeding them, calling them Labrador Dogs. Today Labradors are still used as working gundogs as well as being beloved family pets.

The original Poodle is the Standard Poodle, a water retrieving dog. Their unusual haircuts were not about fashion, but rather a way for owners to make sure their dogs didn’t get waterlogged and become too heavy to swim easily in lakes. While keeping the vital organs and joints protected, much of the rest of their hair was shaved off. The Miniature and Toy Poodles were created purely as smaller versions of the original Poodle for owners who didn’t want such a large dog but were enchanted by their personalities and enthusiasm for all kinds of work.

The Labradoodle can have any combination of the two breeds in their appearance, behaviour and temperament.

Labrador Retriever - eye tests and hip and elbow scoring should be done, including several DNA tests

Information on health tests for both breeds can be found on the Kennel Club’s website.

Some Labradoodle clubs also suggest that there are several potential health issues, and affected dogs should not be bred from (and where possible relevant testing should be done):

Both the breeds that make up the Labradoodle are highly active and enjoy exercise and will be happy with two hours plus every day. But they will still enjoy games, training, interactive toys and being involved in all family activities at the rest of the time too.

The Labradoodle is a large active dog and so needs a good-sized living space - plus they are very active and so will appreciate a large garden and access to the great outdoors for the long walks they will need.

Large breed dogs, as well as having large appetites, benefit from a different balance of nutrients including minerals and vitamins compared to smaller-breed dogs. Labradoodles like most large breed dogs can be prone to bloating and stomach problems, but smaller, more frequent meals can help minimise this risk.

The Labradoodle diet needs to have the right balance of all the main nutrient groups including a constant supply of fresh water. It's important to conduct regular body condition scores to ensure you keep your dog in ideal shape and remember to feed him at least twice daily and in accordance with the dog feeding guidelines of his particular food.

This means they may not shed or shed minimally (the Poodle coat) but in that case will require regular trimming. Or else they may shed (the Labrador coat) and may or may not have an unruly coat that is prone to matting. They can be anything from low maintenance to high maintenance so be prepared for either!

Find a good local groomer who can either look after your Labradoodle’s coat or teach you how to do it yourself as their coat develops.

Dog training is important for this very active, smart and busy dog. They are a joy to train as both the breeds are intelligent and love working with their owner - but they will learn bad habits as quickly as good ones so reward-based training should start early and be ongoing. This is a great breed for dog sports such as agility or even pet gundog work - and they will love having an active job to do.

It is important to train a Labradoodle to enjoy handling and grooming (as they will need a lot of it) and to happily give up any prizes they may rather hold onto - always using positive, reward-based methods.

Given they have a working gundog background, they should be well socialised with cats (who they can learn to live with happily) but they should be watched with caution around other small animals and birds.

The Labradoodle is close to being the perfect family dog. If the Labradoodle is sourced from a reliable breeder, and well-trained from puppyhood, they will make fabulous family dogs, be a total joy to own and will get on with everyone. An untrained or bored Labradoodle can however easily become unruly and overly boisterous.

Labradoodles make great therapy dogs. Their warm personality is often a match for people with autism or physical disabilities.