This is a moderately large, powerful, yet elegant dog. The coat is smooth, short and the body carriage should be proud and can be likened to a thoroughbred horse. They’re full of energy and smarts which makes them great guardians and amazing candidates for police and military jobs. 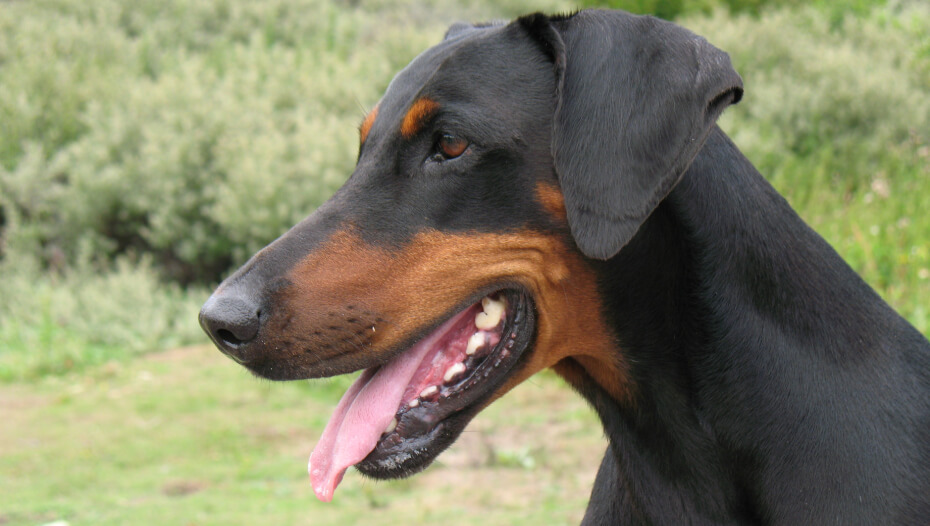 The Dobermann is a dog who needs mental and physical activity. Socialised early with other dogs, pets and children, the Dobermann can make a good family pet. Being loyal and affectionate these dogs will certainly protect the home.

They often tend to be a 'one man dog' and will usually ‘belong’ more to one person in the family rather than the whole family. Dobermanns are often suspicious of strangers - human and canine. By merit of their size, strength and activity levels - as well as their guarding tendencies - they are not for the inexperienced or for those who can’t put in the time to exercise and train these demanding dogs. 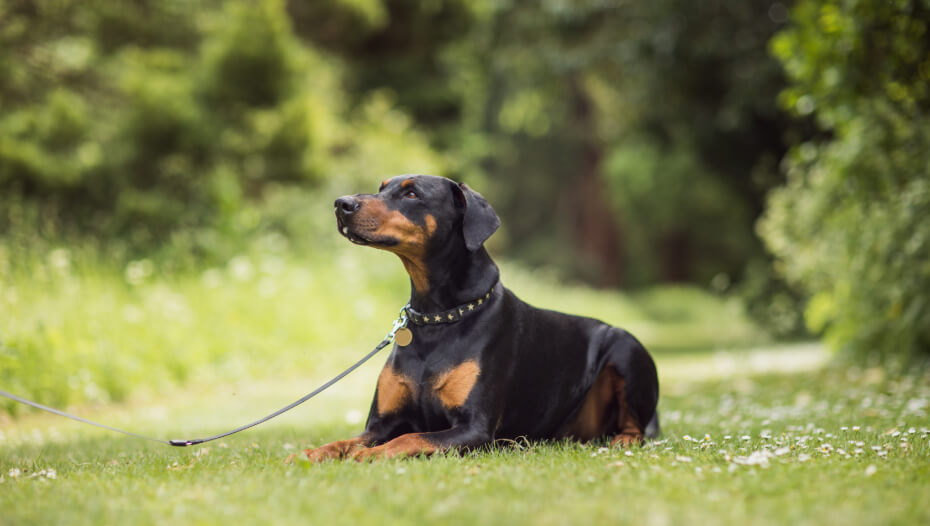 The Dobermann was created with a very specific job in mind. In the late 19th century Louis Dobermann, a German tax collector was getting pretty fed up of getting robbed when he was collecting money and decided he needed an effective personal protection dog. As he was also the director of the local animal shelter, he had plenty of opportunities to do some complicated cross-breeding in order to produce a physically imposing dog who would be both fierce if needs be and act as an effective deterrent.

Sadly, Herr Dobermann was a far better tax collector than he was at recording his dog breeding so it is largely guesswork what breeds he used to create his perfect companion. It’s thought that he added German Pinschers, Rottweilers, Beaucerons and German Pointers to the mix, but despite some now hazy beginnings, he certainly created an impressive and now well-loved dog.

By 1899 the breed was recognised by the German Kennel Club and they soon became popular the world over for their almost unbeatable skills as a property guard and in security work. Their guarding traits have been watered down over the years and they are now more often to be seen as companion dogs but those instincts are often not that far from the surface.

The most common health problems encountered in Dobermanns are heart disease, a problem with the vertebrae in the neck (Wobbler's syndrome) and von Willebrand's disease (a disorder of blood clotting). As with many breeds, they can suffer from various hereditary eye disorders, and hip dysplasia (a condition that can lead to mobility problems). Eye testing and hip scoring of dogs prior to breeding is therefore important. Contact the breed club for the most up to date health testing information.

A Dobermann needs plenty of dog exercise, training and stimulation. This is an active, athletic breed that will enjoy long walks to include free-running. Two-plus hours of daily exercise is recommended for an adult Doberman, along with ongoing training. They are also a playful dog so will enjoy enrichment toys and interactive games to keep their brains and bodies occupied.

The Dobermann is a large dog breed with serious exercise needs and so needs a substantial sized house and garden - and ideally with access to the countryside for the long walks they will need. If the dog is to have free range of the garden, safe access to the front door will be needed for deliveries etc.

Large breed dogs, as well as having large appetites, benefit from a different balance of nutrients including minerals and vitamins compared to smaller-breed dogs. Dobermanns are prone to bloating and stomach problems; smaller, more frequent meals can help minimise this risk.

Dobermanns take very little dog grooming. A good rub down with a rubber grooming mitt will remove any dead or loose hair.

Dobermanns are clever and love to work with their owners and so are extremely trainable. These are dog who need to be trained to a high level to keep them controllable, safe and to manage their natural guarding instincts. Early dog socialisation is extremely important as their natural suspicion of strangers can cause serious problems if under-socialised and not well-managed.

While the Dobermann can make a great family dog that is devoted to all, they are generally too large for smaller children and may be problematic with visiting children or their parents so they are better in child-free situations or with older sensible children.

During the first World War the breed almost died out as people in Europe couldn’t afford to keep such large dogs but the Dobermann found work in the military and police which ensured their future. When they first hit the show rings legend says that judges were too scared of them to open their mouths to look at their teeth and so one dog became a Champion despite missing several teeth!