Rottweiler dogs (or 'Rotties') are large, compact dogs known for their solid black coats with clearly defined rust-coloured markings. Rottweilers are strong, agile, powerful dogs for their size, capable of running and jumping with ease. 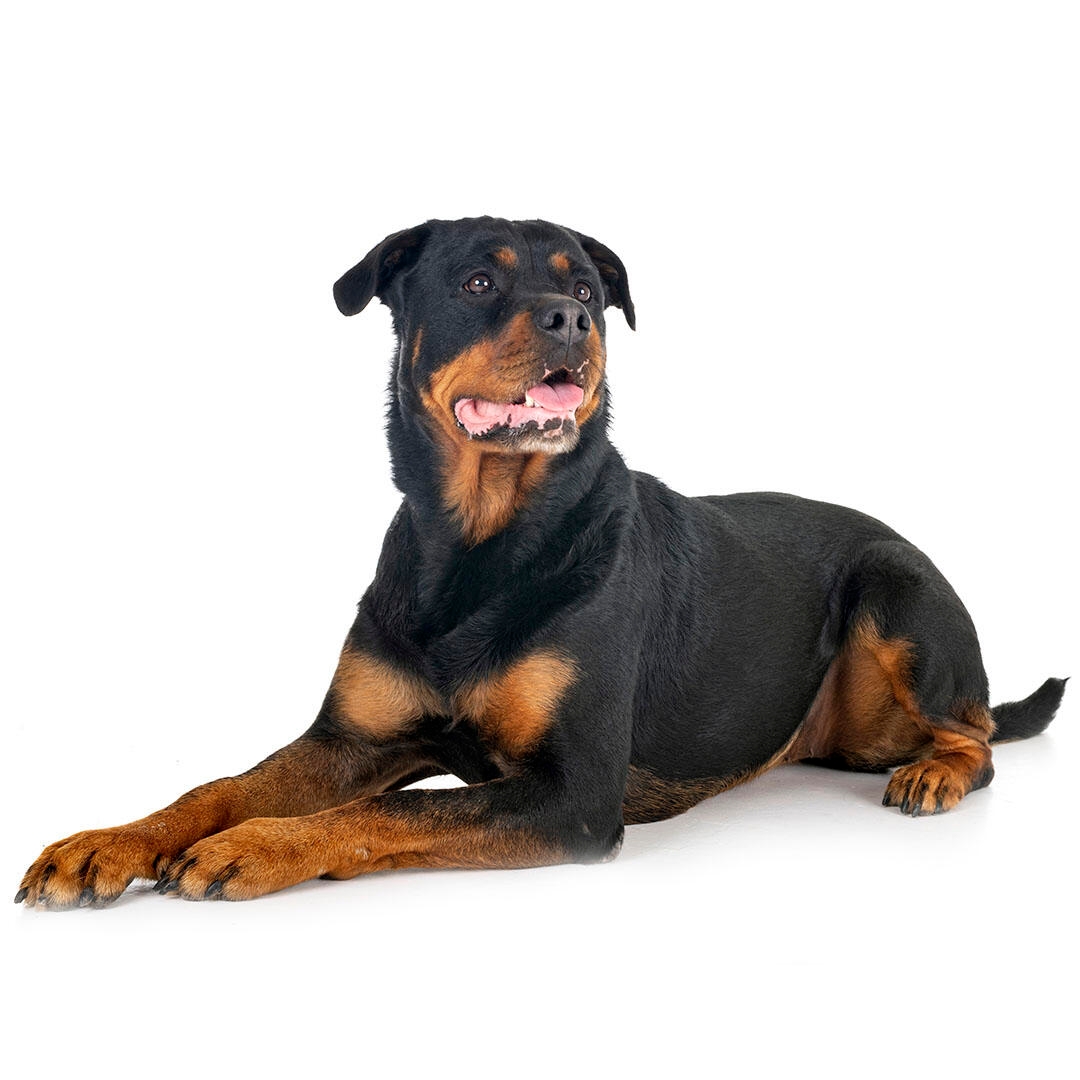 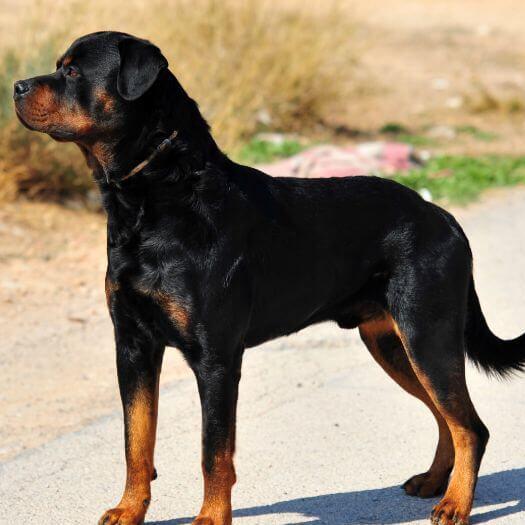 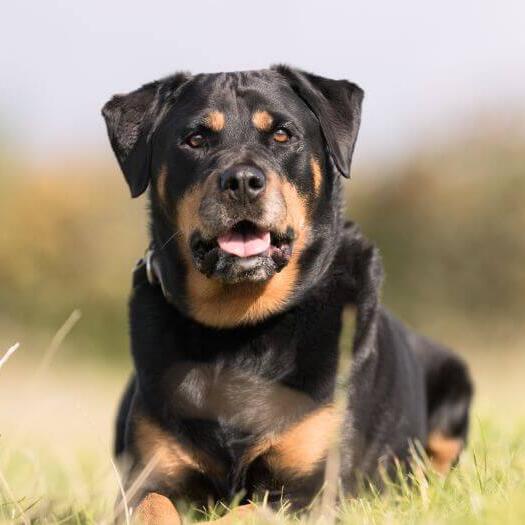 The Rottweiler breed may suffer from:
- Hip dysplasia
- Elbow dysplasia
- Gastric dilatation volvulus
- Osteochondrosis dissecans
- Cruciate disease which is where the ligaments in the knee become diseased and damaged which can lead to pain and limping.
- Juvenile laryngeal paralysis and polyneuropathy which is a condition where the nervous system deteriorates. The disease affects the nerves in the throat first which can obstruct breathing.
- Subaortic stenosis¹ which is a narrowing of one of the passages leading out of the heart.
- Multifocal retinal dysplasia which is an inherited eye condition that can seriously affect a dogs vision.
- Osteosarcomas which are a serious type of bone cancer.
- Lymphoma² which is a cancer in some of the cells that make up immune system.
- Hot spots, which are patches of skin which become sore and infected.
- Leukoencephalomyelopathy which is a nervous disease affecting the spinal cord.

While they are not dogs who usually show their feelings, even with their owners, they are unconditionally loyal to their handlers and their families and will naturally defend them and their property. A popular breed with unscrupulous breeders, it's important to find a well-bred, well-socialised pup, as temperaments can vary. The importance of socialisation and training from an early age cannot be overstressed! This breed is not suited to the novice/inexperienced owner.

The breed’s ancestors were the mastiff-like, cattle-herding dogs of the ancient Romans who accompanied their armies as they swept across Europe. Some of these dogs were left behind when the army moved on, and in Germany, they bred with local sheepdogs and produced the Rottweiler. The Rottweiler was originally known as the Rottweiler Metzerhund - which translates as the Butcher’s Dog from Rottweil (a market town in South-West Germany). The breed would mostly help move cattle on the way to slaughter but also worked as a livestock guardian and a property guard. They would also protect their owner who, after selling his wares, would be a target for thieves and bandits who would try to rob him. The Rottweiler made sure they didn’t!

When the industrial revolution came along and cattle were moved by train, the breed declined and it was only with the outbreak of the First World War that the breed once again found a role, this time in the service of the German army where they excelled as guard dogs. In 1930 they were first imported to Britain and were recognised by the Kennel Club in 1966.

The Rottweiler would suit an experienced owner with a large property who wants a loyal one-man dog that they can enjoy training and socialising.

Rottweilers need both exercise and training - and plenty of it to keep them happy and healthy. They enjoy long walks in the countryside, and a well-trained and socialised Rottweiler will usually stay very close to their owner. Ensure your Rottweiler is well-socialised and friendly with other dogs before letting them off the lead - and supervise all interactions with other dogs. Some Rottweilers can be problematic with other dogs and may need to be kept on lead around others.

For an adult, two hours of daily exercise is required to include training and brain games.

This is a large, active dog, who needs plenty of indoor and outdoor space, and a well-fenced garden. As he can guard territory from visitors, dog-free access to your front door or letter box for deliveries is important.

Large breed dogs, as well as having large appetites, benefit from a different balance of nutrients including minerals and vitamins compared to smaller-breed dogs. Rottweilers are also prone to bloating and stomach problems. Smaller, more frequent meals can help minimise this risk.

This is one of the easiest breeds to maintain. Give your Rottweiler a good brush down with a rubber glove every now and then – and more regularly during the moulting seasons – and this will suffice.

The Rottweiler is a powerful, active working dog and as such he needs an experienced, firm but fair, owner to make sure he gets all the socialisation and training he needs to be a safe and friendly member of society.

With the right owner, they can be trained to a very high standard, excel in canine sports or blossom with a job to do – in other words be an unbeatable dog. But the amount of work needed to keep them mentally and physically stimulated, and adequately socialised, makes them high maintenance dogs for expert owners.

Not an ideal family dog as while he is usually devoted to his own children, he can easily mistake the intentions of their friends. Plus, in his clumsiness, he can knock over small children. With training and socialisation, the Rottweiler may be able to live with older sensible children.