This giant-sized dog has a large, broad, round head with lots of wrinkles. They have a strong, muscular neck and body with a deep, broad chest. 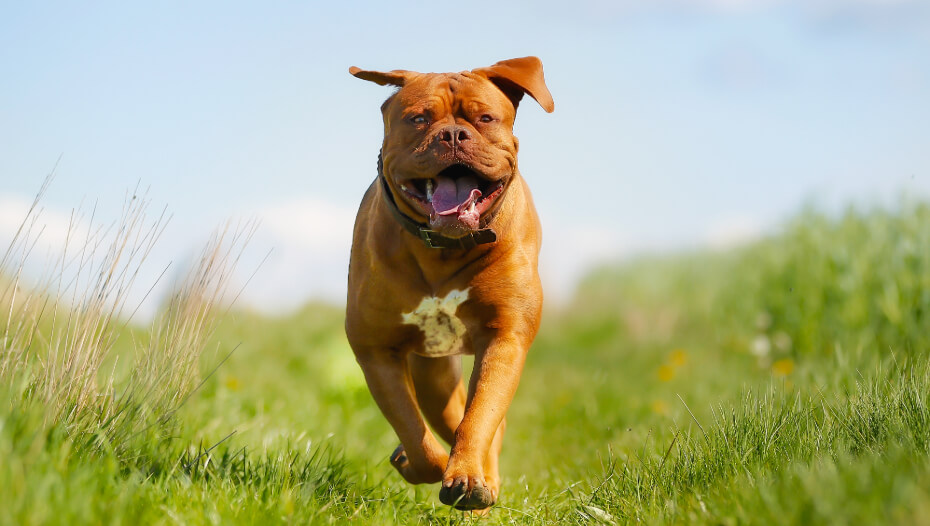 The Dogue de Bordeaux is a devoted companion that bonds closely with their family and will protect them and their territory if they feel it is threatened. Well-bred, socialised and trained, they are good with children and will accept other household pets if introduced to them when young. They may be aloof - or even positively discouraging - with strangers. They love to please and need to be trained in a consistent and calm manner as they can be surprisingly sensitive. 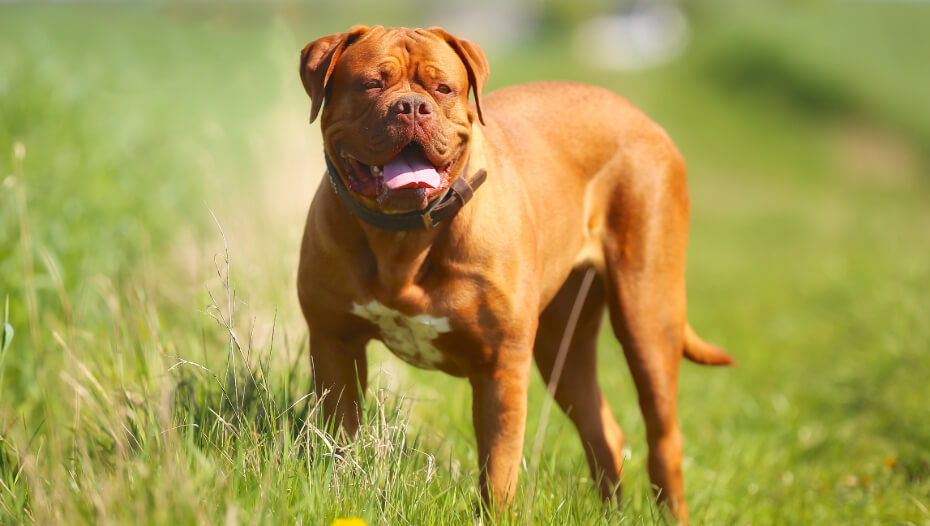 The precise origin of this breed is unknown with some thinking that is it was originally an ancient Roman breed while others suggest it is descended from the Tibetan Mastiff and the Greek Molossus. Others say it has always been a French dog that has slowly been developed over 2000 years. Whatever their history, the Dogue de Bordeaux started their working life as a highly successful fighting dog and was pitted against bulls, bears and other dogs. As well as being a fighter, the Dogue turned their paws to other roles and over the years has been a war dog, a guard dog, a hunting dog and even a cattle driving dog. It was this latter role that saved the breed after the French Revolution when most noble dogs met the same fate as their noble masters. Those working as mere ‘butcher’s dogs’ (who may indeed have been the more peaceable individuals), survived and were later able to re-establish the breed. As part of this re-establishment, they were crossed with the Bulldog which reduced their size.

As with many breeds, the Bordeaux breed can suffer from hip dysplasia (a condition that can lead to mobility problems). Hip scoring of dogs prior to breeding is therefore important.

They are also prone to skin infections in the excessive skin folds.

As they are a brachycephalic breed (short nosed), they can suffer from breathing problems and are likely to be unable to cope with heat or over-exercise.

They do not require as much exercise as may be expected – about an hour daily should be sufficient for an adult but this is better split into several short walks. They do enjoy spending time outside in the garden however, as long as it’s secure and they have both shade and constant access to water. Too much exercise too young can lead to bone and joint problems in later life and so should be carefully monitored.

This is a dog who needs a lot of space both inside and out. Gardens should be securely fenced with no access to casual visitors.

Giant-breed dogs, as well as having giant appetites, benefit from a different balance of minerals and vitamins, supporting different joint and cartilage needs. The Dogue de Bordeaux is prone to bloating and stomach problems; try feeding smaller, more frequent meals to help minimise the risk.

Grooming is relatively easy. A rubber grooming mitt over the short coat once a week, to remove any loose or dead hair is all that is needed. The skin folds on the face should be cleaned and dried regularly to stop any skin infections from starting.

The Dogue de Bordeaux can make a good family dog where there are older sensible children but is too large and often a little clumsy to be good with younger ones. Their aloofness with strangers means they are not good in households with lots of visitors of any age.