Well-balanced and square in outline, the Griffon Bruxellois is a cobby and robust little dog with an endearing appearance due to their short muzzle and large eyes. Often described as having a monkey-like expression, the Griffon Bruxellois comes in two coat types – rough coated, with a harsh, wiry coat that is free from curl, and smooth coated with a short, shiny, tight coat. 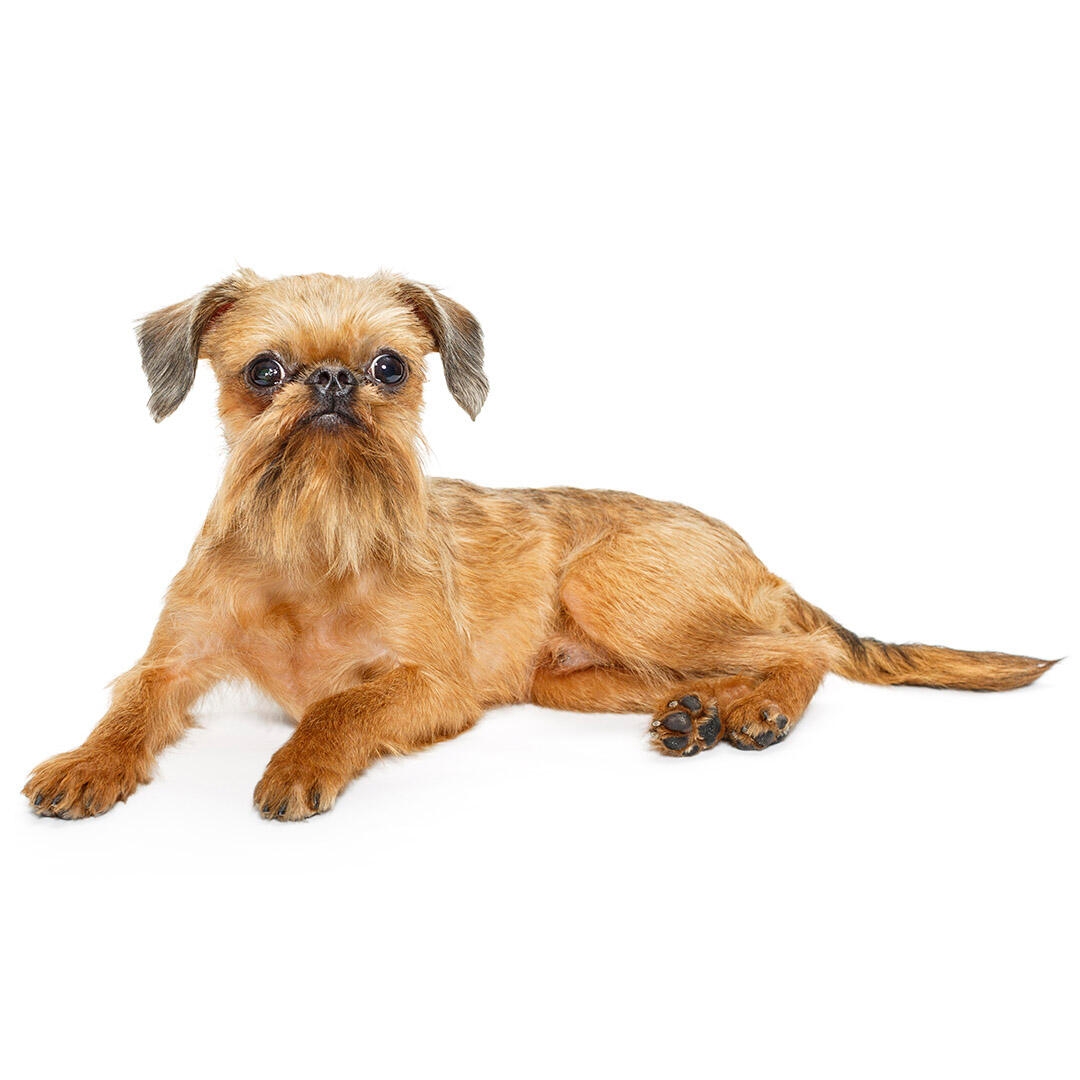 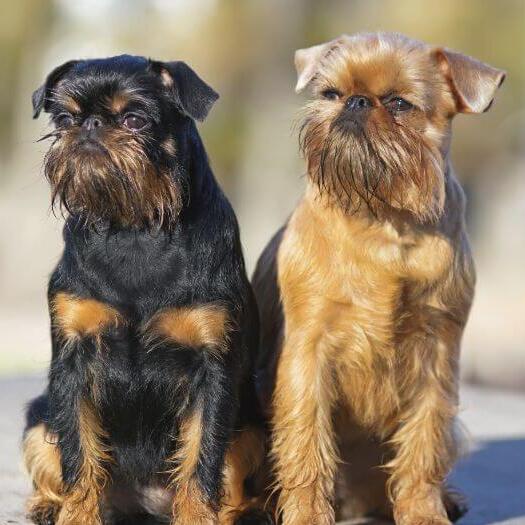 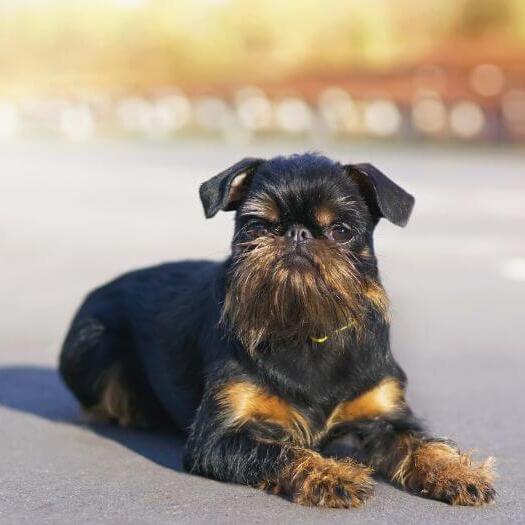 The Griffon Bruxellosis breed is brachycephalic and you can read about the problems that may be associated with this here.
The breed can also be prone to:
- Patellar luxation
- Legg-Perthes disease

Clever and quick, the Griffon Bruxellois is really a terrier, despite being within the Toy group. Although small in stature, this surprisingly weighty and robust dog is capable of long walks, vermin control and a variety of games and dog sports. They will also, if kept entertained and well exercised, enjoy any amount of pampering, sofa cuddles and lap-time, so can be considered a multi-role dog, companion and hard worker. As with most terrier types they are not inclined to tolerate heavy handed treatment from adults or children, but will respond well to consistent and kind training.

Originating in Belgium, the Griffon Bruxellois was created in the 19th Century by crossing Pugs, Affenpinschers and Belgian stable dogs. Their role was to ride alongside the hansom cab driver and act as a watch and guard dog when the driver had to leave the cab and horses. In the stables they also provided vermin control, and so while small, they can be considered a tough little dog.
Later, the addition of the English Toy Spaniel and possibly the Yorkshire Terrier added larger, rounder eyes and a more appealing baby-like face.

In the late 1800’s it was very much the fashion for sporting young gentlemen of the upper classes to own a smart but game little terrier type dog, so it is not surprising that the Griffon Bruxellois was first shown at Crufts in 1896, and the first UK breed club founded in 1897.

This is another terrier masquerading as a toy breed so owners will need to be aware of terrier tendencies and be ready for the challenge of training and living with a quick, sharp, and clever little dog. They do need grooming to keep facial hair clean and free from food waste and drool, and you must be aware of the health implications that come with a very short nose and large eyes.
If you enjoy lots of walks and some fun training, you’ll make a great Griffon Bruxellois owner.

Although small, the Griffon Bruxellois will need two decent walks a day and will take much more if it is offered. An hour a day split into two half hour walks is the bare minimum, with games, training and puzzle solving on top. Although not averse to cold weather, exercise in hot weather must be avoided due to their short muzzles and compromised breathing. Also avoid exercising them in rough undergrowth or thick cover as their prominent eyes are prone to injury.

This breed will fit into the smallest of homes, but ensure you can provide a very secure garden, and have access to a variety of interesting walks including safe areas for off lead play. This is a breed created to be close to people at all times so not suited to those who wish dogs to live in kitchens or utility rooms rather than with the family!

The rough coated Griffon Bruxellois should be hand stripped several times a year - your puppy’s breeder can show you how or else you can find a professional groomer. Beards, eyebrows and leg furnishings should be kept clear of food and debris and brushed through several times a week.
Smooth coats will require a brush once a week with a stiff bristle brush to clear out dander and keep the skin and coat in top condition.

Check eyes, ears and paws for foreign bodies regularly after each walk and ensure any folds or wrinkles are kept clean and dry.

Easily motivated with food and toys, the Griffon Bruxellois will be fun to train and will enjoy life with a family who view dog training as a hobby in its own right. Pay attention to early socialisation with children and other animals, and work hard on a reliable recall – remember, there is a tough terrier inside that cute monkey-like body!

For those who can be with their dog most of the time, and enjoy walking and training, the Griffon Bruxellois can make a fun and engaging companion. Better with older children as play can be quite rough and tumble, and young children may find this upsetting - particularly in the puppy stage when all terrier types will be keen to use their teeth to explore their world and play!

While many dogs are traditionally thought of as being good with children, all dogs and children need to be taught to get on with and respect each other and be safe together. Even so, dogs and young children should never be left alone together and adults should supervise all interactions between them.