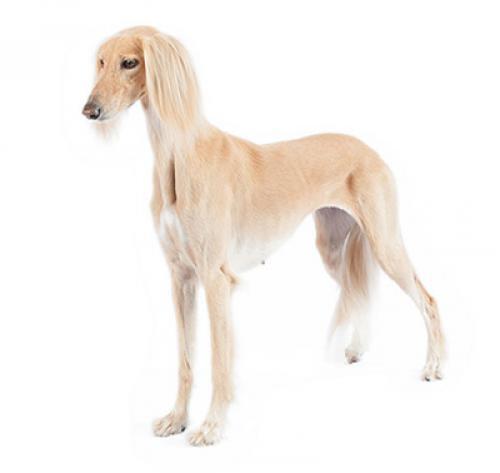 A graceful, athletic, medium-sized sighthound, the Saluki dog breed has a soft, smooth coat, often with feathering (longer hair) on the legs and ears, and sometimes the throat. The smooth type of Saluki lacks this feathering. The coat comes in any colour or combination of colours, except brindle. Adult dogs stand at 58-71cm, with females slightly smaller. Fully grown, they weigh approximately 13-30kg.

An ancient breed, the Saluki is the hunting dog of the desert, bred for thousands of years to catch food for the Bedouin Arabs. A Saluki skull dating back to at least 3500BC was found at the archaeological site in the Mesopotamian city of Tepe Gawra, now in Northern Iraq. The name is thought to come from Saluk or Seleukia, ancient Arab cities. The breed is also known as the Gazelle Hound, after his chosen prey.

As with most sighthounds, the Saluki is reserved with strangers and often aloof even with familiar faces. An independent dog, he is has a dignified presence, but can be overly sensitive and highly strung. He does not like to be left on his own, often becoming anxious if separated from his family for too long. With his loved ones, he can be most affectionate.

The Saluki is generally quite a hardy breed, the most common serious health problem being heart disease.

The Saluki needs over two hours of daily exercise, to include free-running. A sprinter, this dog needs to run in safe locations where he can't come to harm if he chases after a squirrel or rabbit. Training with these dogs is really reliable and recall should be made a top priority. Between exercise periods, the Saluki is generally laidback and relaxed in the house.

Your dog's diet needs to have the right balance of all the main nutrient groups including a constant supply of fresh water. It's important to conduct regular body condition scores to ensure you keep your dog in ideal shape and remember also to feed him at least twice daily and in accordance with the feeding guidelines of his particular food.

The Saluki will need his coat to be groomed a couple of times a week, paying particular attention to any feathering (if present), which is prone to tangling.