The Lykoi is a new and very unusual cat in appearance. They have a wedge-shaped head, large ears and striking golden eyes. Their coat is very soft, with a roan pattern, white hairs scattered through the coat, sparse undercoat except around the eyes, muzzle and feet, giving the appearance of longer guard hairs in other areas. Their name is derived from the Greek word for wolves, in reference to their rather wolfish look.

Beneath the coat, the Lykoi is a lean, lithe cat with a similar physique to the moderate foreign type cats. 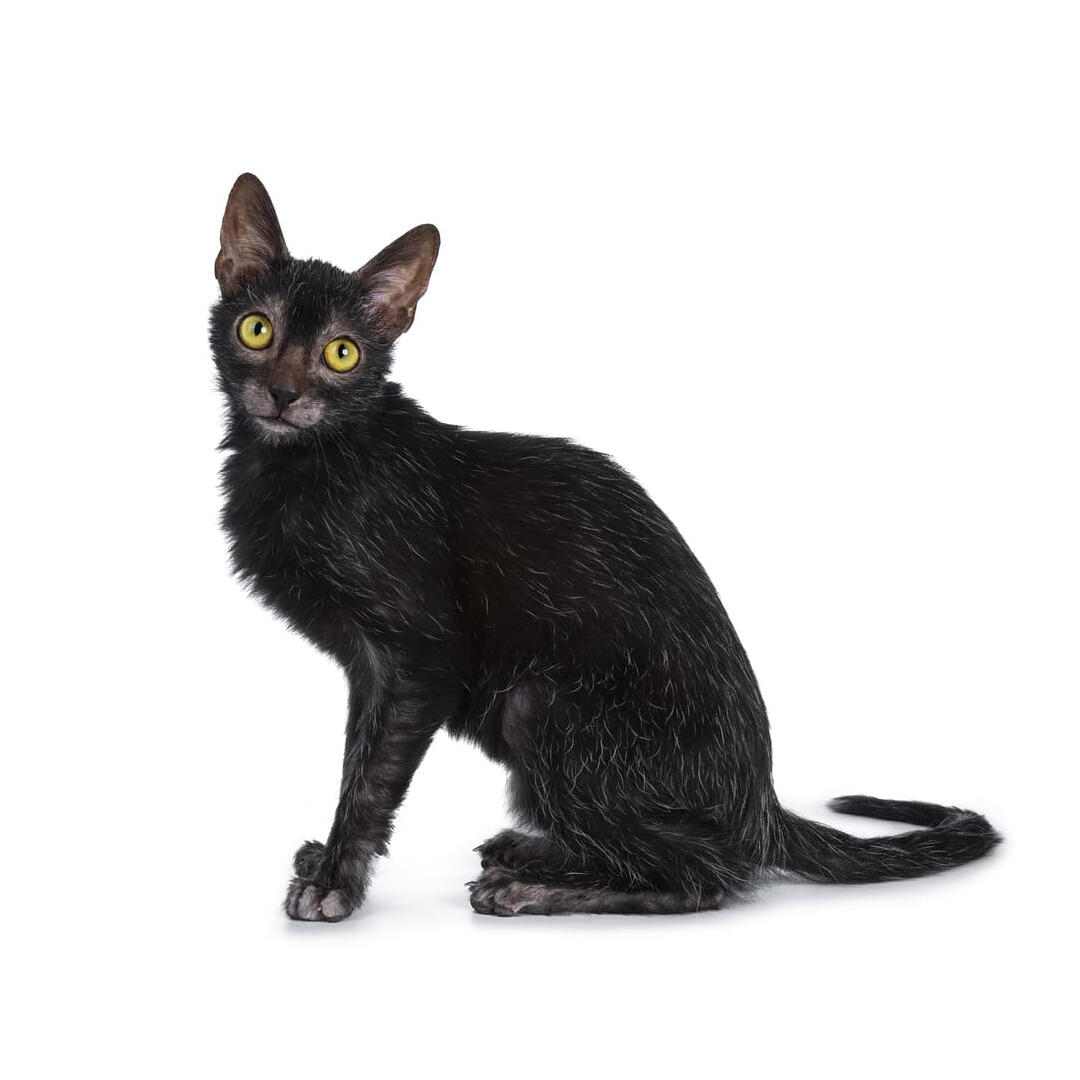 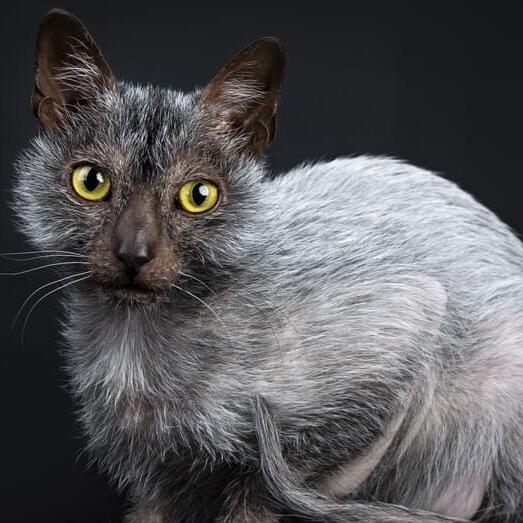 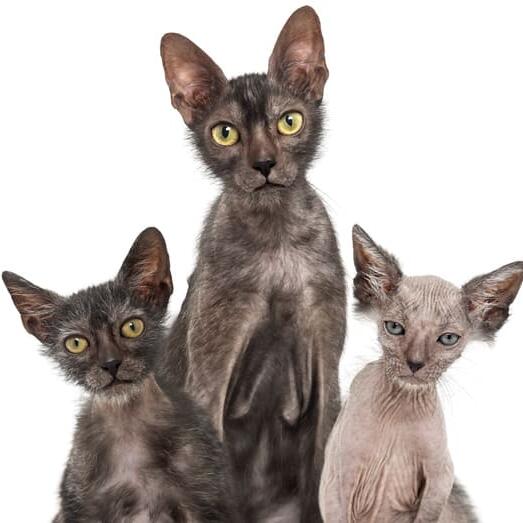 There are no common disorders reported for the Lykoi breed at present.

The Lykoi originated in Virginia, USA in 2010, when a brother and sister were found at a shelter by Patti Thomas. Patti and her vet carried out extensive health tests to discover why these cats appeared so unusual, and discovered that they were healthy, but carried a recessive gene that gave them their sparse roan coat. They found other similar cats and outcrossed to domestic shorthairs, and eventually produced a line of Lykoi cats, where normal coated variants and sparse-coated examples could be bred to produce litters of both coat types.

The first Lykoi were imported into the UK in 2013, and the first sparse-coated Lykoi were born there in May 2015. Still a new and rare breed, be aware that many images of Lykoi published on the internet are photo-manipulated to increase their ‘werewolf’ appearance.

Like other foreign type cats, the Lykoi is intelligent and active, vocal and willing to express their opinion, at volume if necessary. They enjoy interacting with people and other cats, enjoy interactive play and puzzle solving, and if given enough to do, will also relax and laze like less exotic cats.

As a breed they are inquisitive, curious and great problem solvers. The Lykoi is generally an extremely energetic cat, who loves to stay active, however, at the end of a busy day the Lykoi loves nothing more than to cuddle up with it’s humans and enjoy some well-deserved relaxation.

The Lykoi will need some significant entertainment on a daily basis, in the form of food dispensing puzzles, fetch games, cat games and anything else you can invent. They need to climb and jump, so factor in space for cat trees and jungle gyms. Being a sparse coated cat, they like a home on the warm side and will delight in any warm sunny spot in summer, and hog the radiator or fire in winter.

The Lykoi’s sparse coat is not well suited to extremes of weather, because of this Lykoi’s should be kept as indoor cats. They will get cold and wet in wind and rain, and risk sunburn on hotter days. They are unable to insulate themselves, so care must be taken in regards to the environment they’re kept in. With supervision the Lykoi can be given access to a secure garden, or free access to a sheltered cat-run, as long as they can get out of the sun or cold as they need.

Beyond those main concerns, the breed is pretty adaptable. They don’t climb or hide any more than a typical breed, so have a cat tree, a few scratching posts, and a couple of toys or cat games should suit them perfectly.

Despite their unusual appearance, the nutritional needs of the Lykoi do not differ from other cats.

While the Lykoi’s fur is not long and will not tangle, their generally dishevelled appearance may make it harder to spot scrapes and minor injuries, so a daily once over to go through the coat is sensible, with a proper comb through once a week. Lykoi’s can shed their entire coat, before growing it back for the next season, so a good grooming routine is imperative for this breed. Brushing them once, or twice a week will be enough to stay on top of all the shedding. It is also a good idea to bathe this breed once a month or so to keep their exposed skin clean and free of any oil build-up.

Remember that a greasy coat can be evidence that your cat is no longer attempting to groom themselves, which can be indicative of poor or failing health or excessive weight. As with all cats, Lykoi benefit from regular vaccination, parasite control and an annual veterinary health check.

The Lykoi is better suited to a quiet home, either with quiet teenagers or no children at all – they are time consuming and demanding, very active and can easily develop behavioural problems in too busy, loud or chaotic an environment. They must not be allowed outside a secure environment, and this can be a big risk with young children.

When it comes to other household pets, he good-natured Lykoi fares well with many domestic animals. However, supervision with early interactions should always take place. Sometimes, these interactions are very dependant on the individual pets’ personalities. Ultimately, early socialisation really pays off with this breed.

It may be hard to find this specific breed in rescue shelters, due to them being relatively new. However, it is possible that one may be in need of a new home. Please consult the adoption organisation, if you are adopting, for details on a specific cat’s character.