One of the most recognisable breeds, the English Bulldog has a short, sturdy body and fairly loose skin, especially at the head, neck and shoulders. Other distinguishing features are the large skull, flattened nose and undershot jaw. Sweet and courageous, Bulldogs love the couch more than their daily walks, but will make great companions, always happy to get along with everyone in the family, young and old. 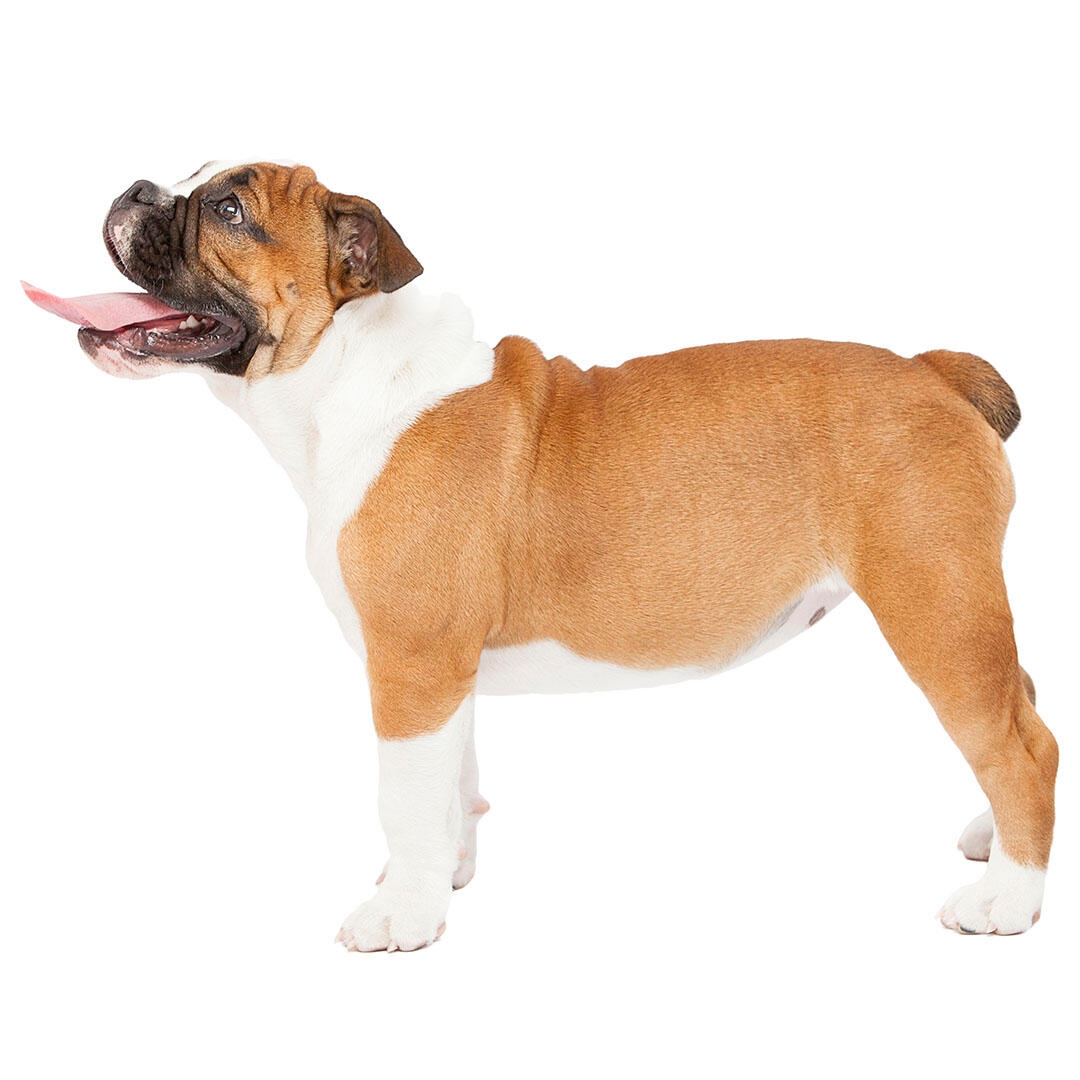 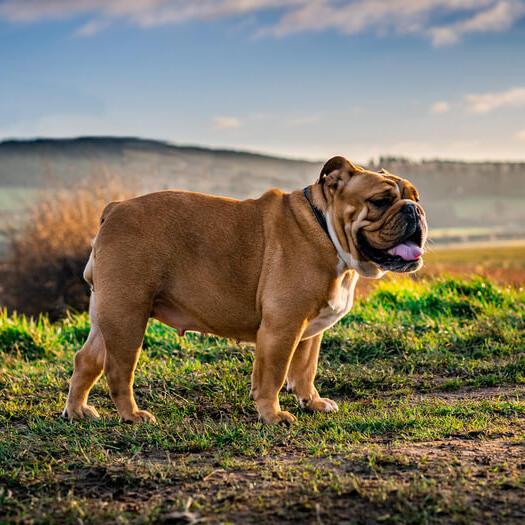 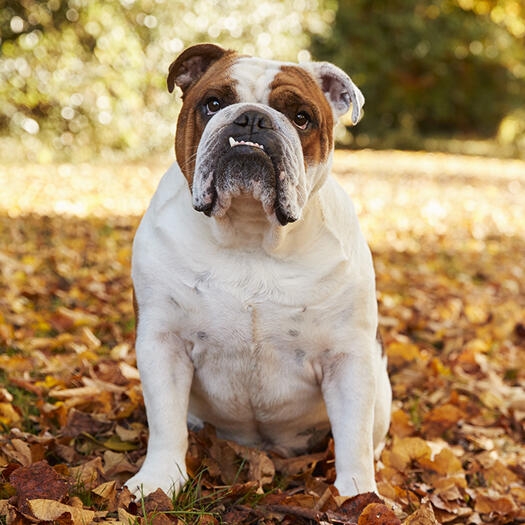 The breed can also be prone to:
- Hip dysplasia
- Elbow dysplasia
- Entropion and/or ectropion which are painful conditions where the eyelids turn inwards or outwards, this happens as a result of excessive skin around the eyes
- Keratoconjunctivitis sicca (dry eye) which is a painful condition where the tear gland stops working properly
- Cherry eye which is where a gland within the third eyelid pops up in the corner of the eye
- Skin infections as they have a large amount of skin and lots of skin folds over their bodies which are prone to bacteria

The Bulldog is an enchanting family dog that loves children and will even learn to get along with other pets if introduced to them at an early age. The Bulldog is a bit too friendly to be a good guard dog but would in all likelihood defend a family member in need. He can be peaceful, pensive, goofy, stubborn, and has a well-developed sense of humour.

Bulldogs are descended from the ancient breed of Bullenbeissers, a mastiff-like dog used for guarding and attacking wild animals in Assyria, Greece, Egypt and Rome. The English Bulldog however was developed for a very specific purpose - the cruel sport of bull-baiting. This sport was introduced by the Normans in the 12th century after the conquest when street entertainers brought their bulls, bears and dogs to England. The dogs were allowed to bait the tethered bulls as a primitive side show and slowly this pastime grew from torment to torture.

By the 16th century it was so widespread that Queen Elizabeth would frequently offer it as entertainment to visiting dignitaries. With this royal patronage, a different kind of dog was developed who could excel in this sport. They needed to be smaller so they were out of reach of horns, with massive powerful jaws, and an ability to breathe while they hung onto a bull by their teeth. This meant that they needed a flattened nose set back from their jaw.

When cruel sports were banned in 1835, it seemed that the breed would vanish, but showing enthusiasts took over and Bulldog classes became highly competitive. Over the next 100 years, the Bulldog continued to change shape as their legs grew shorter and their face more flattened - until today there are serious health concerns within the breed. This doesn’t however affect the personality of this good-natured, gentle breed who makes a delightful companion dog for those happy to potentially spend a lot of money at the vets.

The Bulldog requires a robust, sensible and dedicated owner. Unfortunately their short face, skin wrinkles and short tail can lead to health problems that take a lot of care and money to address. The happiest Bulldogs have owners who are home most of the time, enjoy a bit of fun training, long slow ambles around the countryside and don’t mind drool, snoring and regular cleaning out of wrinkles!

Bulldogs should never be exercised in the heat of the day. Two relatively short walks, at a steady but not terribly brisk pace, should be adequate. They do enjoy relaxing in the garden as long as they have shade and a constant supply of water. When it comes to dog exercise, at heart the Bulldog is a bit of a couch potato!

As long as you have a comfy sofa and access to outdoor space for toileting and short walks, a Bulldog will be happy. They do however enjoy a shady garden.

When feeding your dog, remember that your pet’s diet needs to have the right balance of all the main nutrient groups including a constant supply of fresh water. It's also important to conduct regular dog body condition scores to ensure you keep your pet in ideal shape and remember to feed them at least twice daily and in accordance with the feeding guidelines of their particular food.

A bulldog’s coat should be groomed with a rubber grooming mitt to remove loose and dead hairs and the folds may need cleaning. If the breed has a recessed screw tail, care should be taken to keep the tail base from becoming moist, as this will lead to bacterial infections. Another dog grooming measure that must be taken is the cleaning of tearstains and wrinkles.

Training a Bulldog is largely a fruitless exercise as while they love being with their owner, dog training isn’t something that interests them at all! At the very least they need to be trained to walk on a harness (never a collar as this may restrict their poor breathing even further). Early puppy socialisation however is important so a good puppy class for this reason alone is important.

Bulldogs make good family pets although they aren’t ones for games and charging around, so a family with quieter older children may suit them best’