The Chesapeake Bay Retriever is a large, powerful and muscular dog. Slightly larger and longer in the leg than the Labrador, the Chesapeake has a very dense, thick coat. This should be short and hard, with an oily feel to it, smooth on the face and legs but wavy over the shoulders. Along with the water-resistant coat which protects the Chesapeake from the harshest of weather conditions, they have strong webbed feet, making them excellent swimmers. 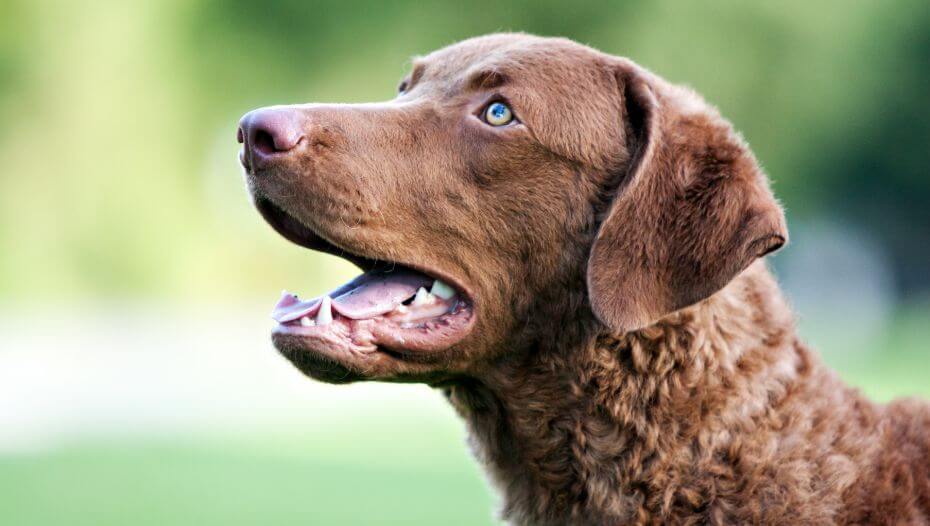 Bright and cheerful, playful and independent, the Chesapeake Bay Retriever is a big and powerful dog, and not ideally suited to the novice owner. With the right approach, and an owner who understands what makes these dogs tick and has the ability to provide for that, they can make an excellent companion, but this is a hard-working breed who really wants to work. They won’t be happy lazing around and need kind, consistent training to behave as respectable members of canine society. 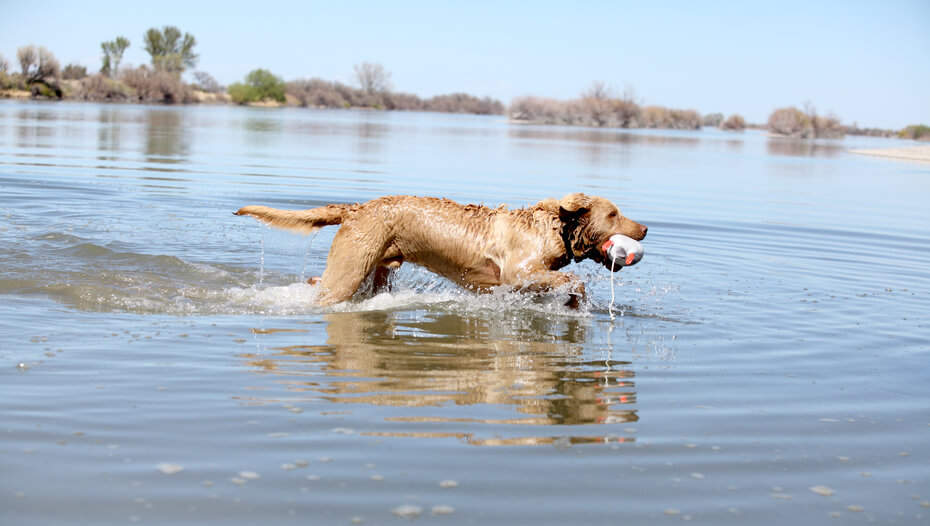 The Chesapeake Bay Retriever is an American breed, named for the Chesapeake Bay which stretches from Havre de Grace, Maryland, to Virginia Beach, Virginia. It is the third largest estuary in the world, and this huge area of wetland meant water-fowl hunters needed a very robust, powerful and water-resistant dog to find and retrieve shot game.

The Chesapeake was developed from British dogs brought over by settlers, and Chesapeake’s ancestors can be traced back to two Newfoundland’s, rescued as puppies from a ship wrecked off the Maryland coast in the early 19th century. These puppies, a brown dog named Sailor and black bitch called Canton were later mated with the local retrieving dogs and their offspring inherited the retrieving ability from their retriever parents and the oily, water-resistant coat, powerful build and webbed feet of their Newfoundland parents, giving them the perfect build and ability to work the icy waters of the Bay.

As with many breeds, the Chesapeake Bay Retriever can suffer from various hereditary eye disorders, and hip dysplasia (a condition that can lead to mobility problems). Eye testing and hip scoring of dogs prior to breeding is therefore important.

The Chesapeake Bay Retriever needs two or more hours exercise per day, walking over a variety of terrain, ideally including swims and retrieval from water. They live to work and won’t thank you for a day off if its raining or cold - they will want to go whatever the weather. The ideal owner will love spending hours in the countryside, and not mind getting muddy or wet.

Games that involve swimming, scenting out hidden toys and retrieving will keep the Chesapeake happy and fulfilled.

This is a large dog, who needs to spend a lot of time outside getting wet and muddy, therefore they are not ideally suited to small homes in urban areas. A home large enough to have a dedicated dog room for them to dry off, and a secure garden, with access to a variety of rural walks will suit them well, as they are better off in the countryside than the town. As bathing can damage their coat, they can smell rather doggy and so non-houseproud owners might well suit them best.

Large breed dogs, as well as having large appetites, benefit from a different balance of nutrients including minerals and vitamins compared to smaller-breed dogs. The Chesapeake Bay Retriever is prone to bloating and stomach problems; smaller, more frequent meals can help minimise this risk.

The coat of the Chesapeake dog is thick and short with a dense woolly undercoat. The coat can be wavy but is not generally curly, feeling oily when touched. It is advised not to wash this dog, as damage can be done to its waterproof coat.

Also take care when brushing, which should only be necessary when the dog is moulting. Brushing will remove the dead and loose hairs. Bathing and excessive brushing could damage the texture of the coat - and so the Chesapeake can sometimes have a rather strong dog smell about them.

Consistency is required with the Chesapeake as they have a very independent mind and if they think you don’t know what you are doing, they will decide what to do for themselves.

Positive reinforcement works well and these dogs adore food and retrieving game or dummies so are not hard to motivate if you are asking them to perform tasks they enjoy.

Work hard on teaching a Chesapeake to be polite in the company of other dogs and people, particularly children, as they can be very enthusiastic in their play, leaning towards rather rude if not well trained and socialised!

Big, bold and requiring a lot of exercise, the Chesapeake is better suited to homes with older children, teens or those without children. Ideal owners would enjoy long walks whatever the weather and want to spend some time training and working their dog either as a gundog proper, or in one of the many sports that recreate elements of water work, scent work or retrieval work.