The Lhasa Apso is a long-coated, sturdy little dog. They are slightly longer than they are tall. They come in a variety of colours: golden, sandy, honey, dark grizzle, slate, smoke, parti-colour, black, white or brown. 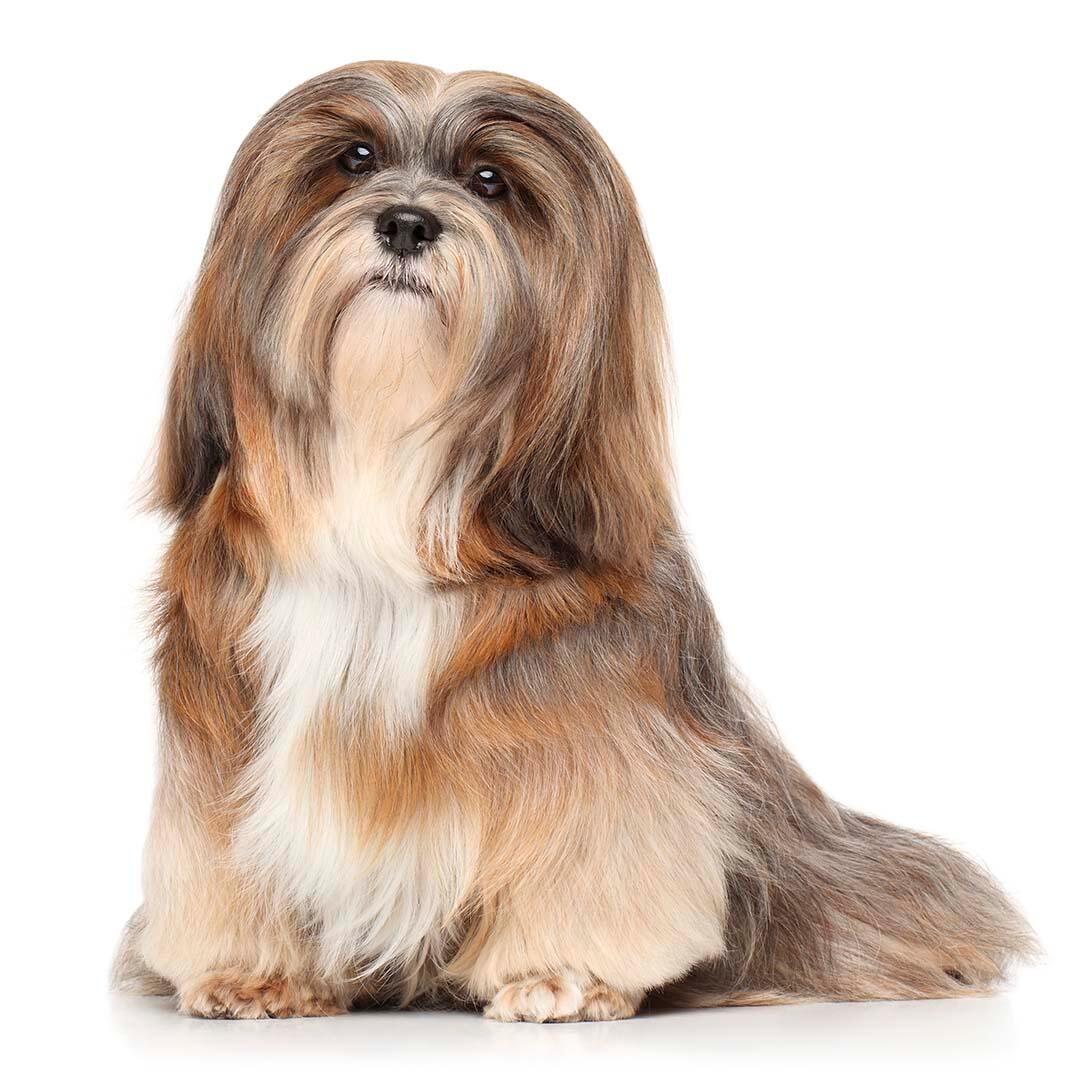 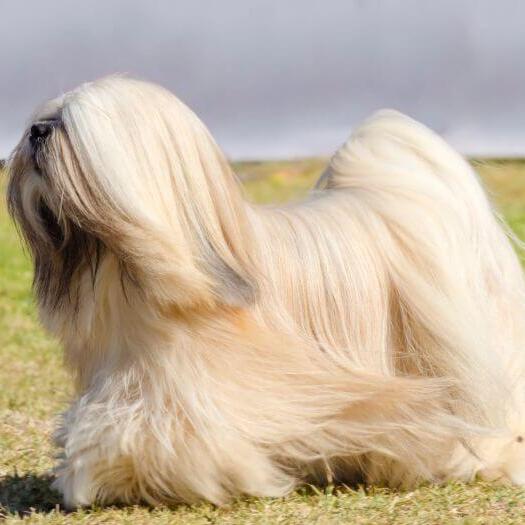 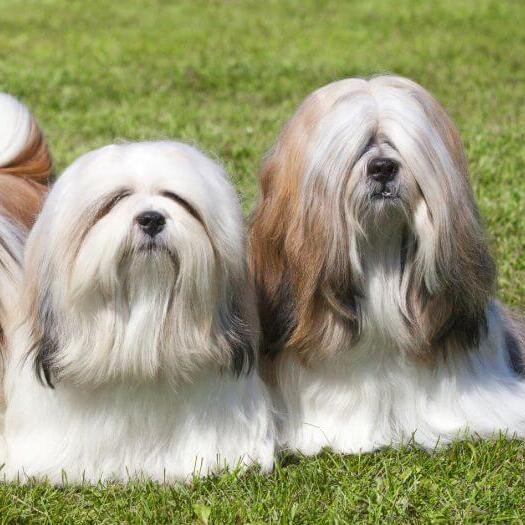 The Lhasa Apso breed is classed as brachycephalic; problems associated with the condition include;
- Brachycephalic obstructive airway syndrome: a condition in brachycephalic breeds (those with a short nose and squashed face) where breathing is obstructed and can lead to reduced ability to exercise, or even severe respiratory distress.
- Skin inflammation/infection: brachycephalic breeds have a short nose and a normal amount of facial tissue. This means there is often excess skin around their face which leads to skin folds. The skin inside these folds can become sore and infections are prone to develop.
- Eye ulcers: ulcers are painful erosions on the surface of the eye. They are more common in brachycephalic breeds due to their conformation, as their eyes tend to be more bulbous.

They can also suffer from:
- Patellar luxation
- Progressive Retinal Atrophy which is an inherited disorder where part of the eye degenerates and wastes away which can result in blindness.
- Keratoconjunctivitis sicca (dry eye) which is a painful condition where the tear gland stops working properly.

Priority Kennel Club health schemes and testing:
- Generalised progressive retinal atrophy DNA test which test whether or not a dog has the potential to be affected by this condition.
- Eye screening scheme
- Intervertebral disc disease¹ a condition where there us abnormality in the discs which act to cushion the bones in the spine.
- Hydrocephalus² which is a condition where fluid builds up around the brain and can cause damage.

The Lhasa Apso is quite an independent dog with a dignity and self-confidence that is entirely becoming in such a venerated breed.  They are devoted and affectionate to their owners but often can be aloof or wary of strangers. With patience and sensitivity, they can be trained to quite a high standard - although may look on training as being entirely beneath them unless it is fun and enjoyable. They are quite sensitive and so do not respond well to raised voices, and do not enjoy being left on their own.

The Lhasa Apso is one of the most ancient of companion dogs having been bred by Tibetan monks and kept hidden in their monasteries for many centuries. Their history is entwined with the larger Tibetan Terrier but where the Tibetan Terrier was used as a working dog, the smaller Lhasa Apso was a companion who also fulfilled the role of monastery and temple watchdog. It may be that originally the smaller Tibetan Terriers were given to the monks and this was the foundation for the new breed but this is purely guesswork.

The monks of Tibet greatly respected these little dogs, as they believed they were the reincarnations of the holy lamas. It was forbidden for a foreigner to own one and they were never sold or bought but only given as gifts. It was considered a great honour to receive one as they were said to bring good luck and prosperity to their owners.

It wasn’t until the start of the 20th century that they became known outside of their native country and it was much later before the breed became established in the UK.

The adult Lhasa Apso needs a minimum of half an hour's daily exercise plus plenty of games, enrichment and owner interaction. They have plenty of energy, but are as happy to stay at home and play as they are to walk for miles and miles. They are perfectly content with several short walks every day and are never happier than when they can accompany their owner everywhere.

While they wanted for nothing their monastical owners could give them, Lhasa Apsos originally led a very enclosed life - which seems to have produced a companion dog who can happily deal with the confined spaces of urban living. As such they can live in small properties as long as they have access to the outdoors for toileting and walks.

Despite that however, they can enjoy country-living too and some will even make a spirited attempt at tackling vermin (although mostly with dubious success!).

The grooming requirements are considerable for the small Lhasa Apso. The topcoat is long, heavy and slightly rough to the touch. The undercoat is a little shorter and softer, and must be combed to prevent any mats and tangles forming. If the coat becomes too much, they can be kept short; a professional groomer, or the breeder, will advise on how this is carried out.

Many Lhasa Apsos can be trained to quite a high standard but it does need patience and consistency - and the ability to motivate them so that training is fun otherwise they are likely to be somewhat disinterested. At the very least, they should be taught a good recall and to walk on a harness and lead.

Lhasa Apsos can make fabulous family dogs as they get on with children and other animals. They are however sensitive dogs that can get extremely worried where there is noise and chaos and as such, families with older, sensible children will suit them best.

While many dogs are traditionally thought of as being good with children, all dogs and children need to be taught to get on with and respect each other, and be safe together. Even so, dogs and young children should never be left alo

There are legends and myths about this breed – the most romantic involving the flying, white-headed, bone-eating goddess Sako. She nested up in the mountains and each year gave birth to two young – one with wings and one without. The wingless one was an Apso but every year because it couldn’t fly, it fell to its death. After several years, the heartbroken Sako place her wingless baby on her back and flew him to the ground – and so the Apso landed in Tibet.