The Morkie is one of the smaller designer crossbreeds and while still not common in the UK, it is growing in popularity around the world due to their loving nature and fluffy looks.

The breeds that make up the Morkie are another two fluffballs, the Maltese and the Yorkshire Terrier, but depending on how they have been bred, this crossbreed has a lot of variety in terms of size, shape, colours and coat types. The Morkie can be a first cross (with one Maltese and one Yorkshire Terrier parent),they can be bred back to one of the original breeds, or be two Morkies bred together. But in all cases this is a very small and friendly companion dog. 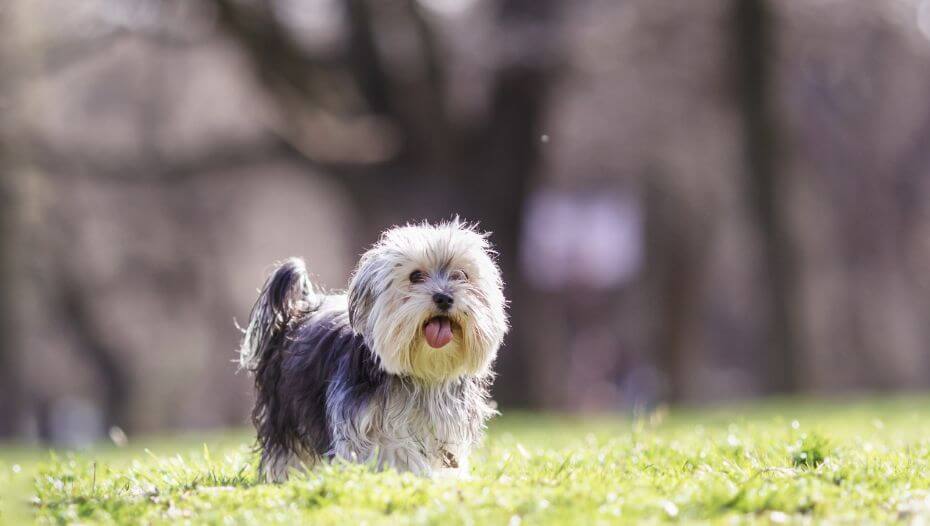 Like most crossbreeds, the personality of a Morkie depends on the parents and how they have been bred and reared. But with both parents being affectionate dogs, who bond closely to their owners, the little Morkie will usually inherit these loveable qualities.

Despite their small size the Maltese is a comparatively robust little dog who as long as they are well-bred and socialised, are active, friendly, trusting and alert. They bond very closely to their owners and will want to go everywhere with them.

This is an intelligent, lively terrier who is affectionate with their owner but has no idea that they are a small dog! They are fearless, tenacious and protective of their home and their people. They will enjoy games and are constantly on the go. They’ll love nothing more than to be a part of everything their owner does.

From looking at the two breeds that make up the Morkie, the result can only be a small companion dog who will enjoy training and games and loves being in their owner’s presence at all times.

The personality of a Morkie seems to be more consistent when they are first crosses (F1). As a line is successively bred, they can be either bred back to one of the original breeds (and so strengthen either the Maltese or the terrier personalities) or be bred to another Morkie, in which case there is less predictability in temperament (and in-breeding becomes more of a potential issue).

Responsible breeders should be prioritising behaviour as highly as health and so it is important to find a good breeder. A well-bred Morkie should be outgoing and confiden, not nervous, shy or fearful. 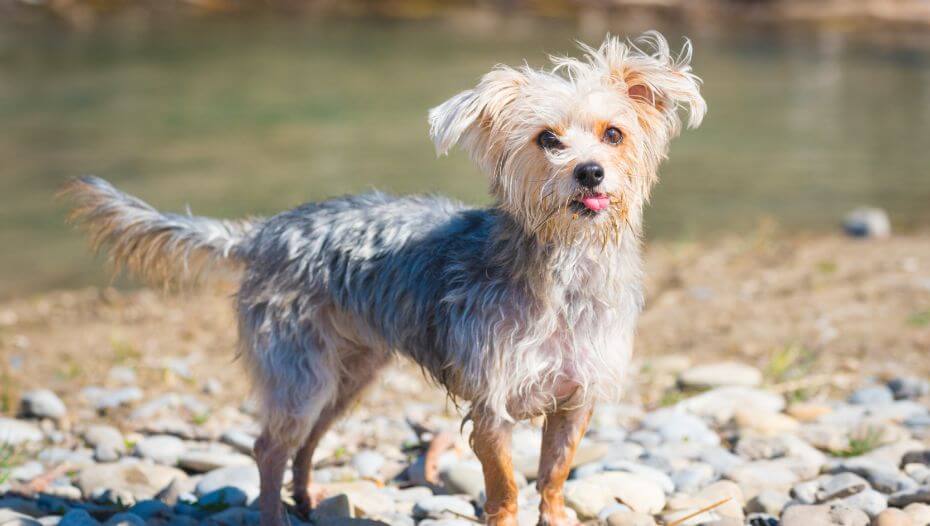 Like many of the designer crossbreeds, the Morkie originated in the United States in a quest to find a small companion dog that would fit into any family’s lifestyle no matter how small their home and garden.

The two breeds that go into the formation of the Morkie are the Maltese and the Yorkshire Terrier.

The Maltese is one of the earliest small companion dog breeds. The earliest records are from the early 1800s where they became known as lapdogs of the nobility, frequently appearing in paintings of the time. Throughout the 19th and 20th centuries they became increasingly popular both in Malta and wider afield, and thanks to both their appearance and their temperament they quickly found fans around the world. Their first appearance as a show dog was recorded in in England in 1859.

Country of Origin: England and Scotland

There is still some mystery surrounding the origin of the Yorkshire Terries, but it is believed that Scottish weavers brought a small terrier with them during a period of immigration from Scotland to Yorkshire and Lancashire during the 1850s. These 'Broken-Haired Scotch Terriers,' interbred with local small terriers to provide a working dog who quickly become popular as a very effective vermin-killer for factory and mining. The added bonus was its size, small enough that could be carried in their owner’s pocket.

Further breeds were used to perfect this Northern ratter including possibly the Manchester Terrier, the Maltese, the Skye Terrier, the Dandie Dinmont terrier, and the now extinct Paisley and Clydesdale Terriers. Shown as the Scotch Terrier in 1861, the dog later became known as the Yorkshire Terrier and was recognised by the Kennel Club in 1886.

While the breed was a working ratter, the Yorkshire Terrier soon became popular with wealthy ladies as a companion and this popularity lead to selective breeding to make them even smaller. Interestingly, while the dog got smaller, their coat length stayed virtually the same - hence the long coats that can still be seen on show dogs.

The Morkie can have any combination of the two breeds in their appearance, behaviour and temperament.

The Morkie would suit an owner or a family with older sensible children and may have a smaller property. They are a fun companion who doesn’t need a great deal of exercise, but will still enjoy joining in all the family’s activities. They do not like to be left alone and so would need an owner who is either at home most of the time or can take their dog with them wherever they go.

Information on health tests for both breeds can be found on the Kennel Club’s website.

While this is a surprisingly active small dog, the Morkie will be happy with half an hour to an hour’s walking each day, as long as they have plenty of games and owner interaction.

Separation related behaviour problems are very common in the Morkie.

The Morkie can be a bit of a barker - especially if bored or if left alone.

Like many toy breeds, toilet training can be slow and so owners need to be patient and consistent.

This is a small dog who can live in a flat or a smaller property, as long as they have access to the outdoors for toileting and walks.

Toy dogs have a fast metabolism, meaning they burn energy at a high rate. Because of their small stomachs, they must eat little and often. Small-breed foods are specifically designed with appropriate levels of key nutrients and smaller kibble sizes to suit smaller mouths. This also encourages chewing and improves digestion.

Your dog's diet needs to have the right balance of all the main nutrient groups including a constant supply of fresh water. It's important to conduct regular body condition scores to ensure you keep your dog in ideal shape and remember to feed him at least twice daily and in accordance with the dog feeding guidelines of his particular food.

Morkie coats are likely to be long, silky and can mat. They are unlikely to shed much, but they will require daily coat care. Find a good local groomer who can either look after your Morkie’s coat or teach you how to do it yourself as their coat develops.

The Morkie is far cleverer than many people think and they will enjoy learning dog tricks and games. They should be trained to walk on a lead and harness as well as come back when called.

While this may look like a cute fluffy dog, the Morkie can be surprisingly game when out and can chase squirrels and even the neighbour’s cat! This is a breed that needs early and ongoing dog socialisation so they gain confidence with people and other dogs.

The Morkie makes a fun family companion but as they are small and rather delicate, they suit families with older, sensible children.

Morkies are really tiny at birth, weighing usually a little less than 140 grams.