Athletic and aristocratic, the Basset Bleu de Gascogne is a powerful hound without the heaviness of some basset types. The body is long and low, but also lean and dry, without excess skin or exaggerated ears. 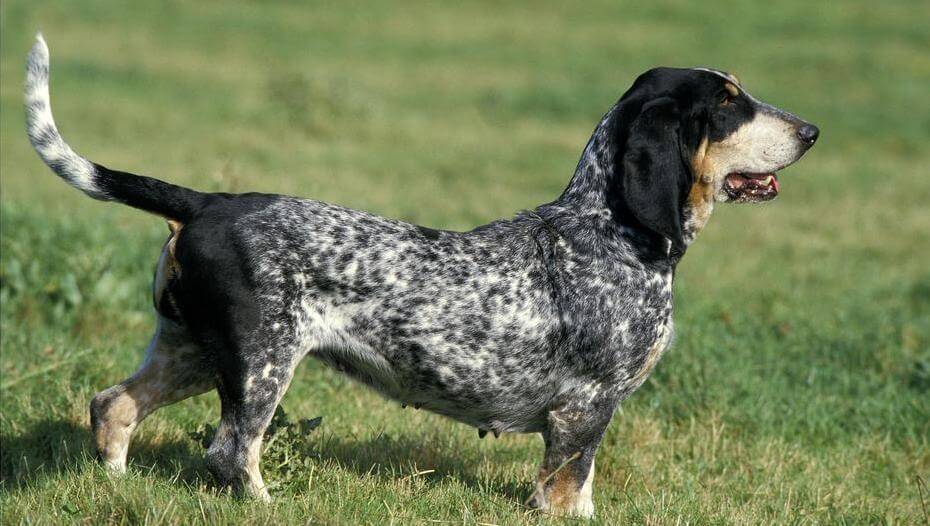 Described as sagacious and audacious, the Basset Bleu de Gascogne is very much a working hound. Never happier than when their noses is to the ground, tail up in the air following a scent. Reserved with strangers but affectionate to the point of comical with loved ones, this is a hound-lovers hound, suited to those who expect a dog to check all available options and consult a higher power before complying with a request! Provided the opportunity to follow scent, run and find hidden toys or treats, this is a happy, highly amusing dog to live with. 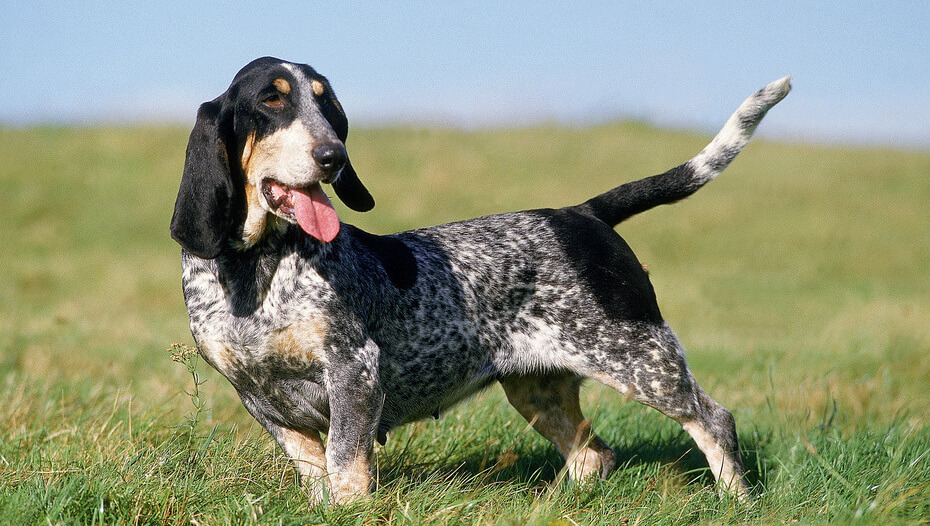 France can lay claim to many hounds, and over the centuries have, it seems, provided a hound for every occasion! The Basset Bleu de Gascogne comes from the Gascogny region in the south-west of France. Mentioned in records as far back as the 12th Century, the ‘bleu’ hounds were used for hunting boar, wolf and deer. In 1911 it was realised that the Basset version of the breed had all but died out. Dedicated breed supporter Alain Bourbon set about recreating the breed, using the longer legged Bleu de Gascogne and any suitable Basset type bitches he could find, until he arrived at a true-breeding replica of the original Basset Bleu de Gascogne.

Saved from extinction but still remaining a rare breed, in 1980 there were just over 200 puppies born. The first Basset Bleu de Gascogne was brought to the UK in 1980, in 2013 just 11 were registered, so rather sadly this is still a numerically tiny breed.

The Basset Bleu is not known to suffer widely from many inherited conditions. Like other dogs with this body shape, they can be expected to be more prone to spinal disorders and abnormal joint development. Check the Kennel Club website and the breed club for up-to-date health information.

This is still at heart a working hound, so will thrive on two hours or more of walking per day. Be sure to include time to follow a scent trail, games that involve scenting out hidden food or toys, and the opportunity to run freely in secure locations. This is a dog who will want to spend much of their waking time outdoors doing something, but if this is need is met, will happily spend the rest of the time upside down on the sofa!

The Basset Bleu de Gascogne does not require a vast home, however a large secure garden is vital. Better suited to country or at least rural suburban living, as this dog wants long walks and access to a variety of routes to follow scent trails, plus somewhere secure to run off lead. They are likely to find a very busy urban area overwhelming and stressful.

Although very responsive to food and positive training methods, this is still an independent minded scent hound. Ears are functional only in a mutually exclusive relationship to the nose – if the nose is down, the ears are firmly switched off! Once you understand that the ears on a scent hound are merely decorative and serve little purpose for listening, it becomes easier to understand how to engage with your hound. The nose is the route to all compliance! Work hard on early training, instilling check-ins and recall as a matter of habit rather than involving any active thought process, socialise well to livestock, pets and children!  For those who enjoy competitive activity, any of the scent-based competitions such as Tracking and Man-trailing will prove fun with a Basset Bleu de Gascogne.

Easy to groom, wipe clean and brush through every few days to check over the body for cuts, scrapes and parasites. Pay attention to paw pads that may pick up grass seeds or grit, and inside the ears too.

This is a great family dog, as long as you have the time to spend exercising and reinforcing training, and understand that hounds are rarely if ever traditionally obedient! They are better with slightly older children as a young hound is quite a boisterous bouncy creature, and not well suited to homes where they will be left alone for more than brief occasions. 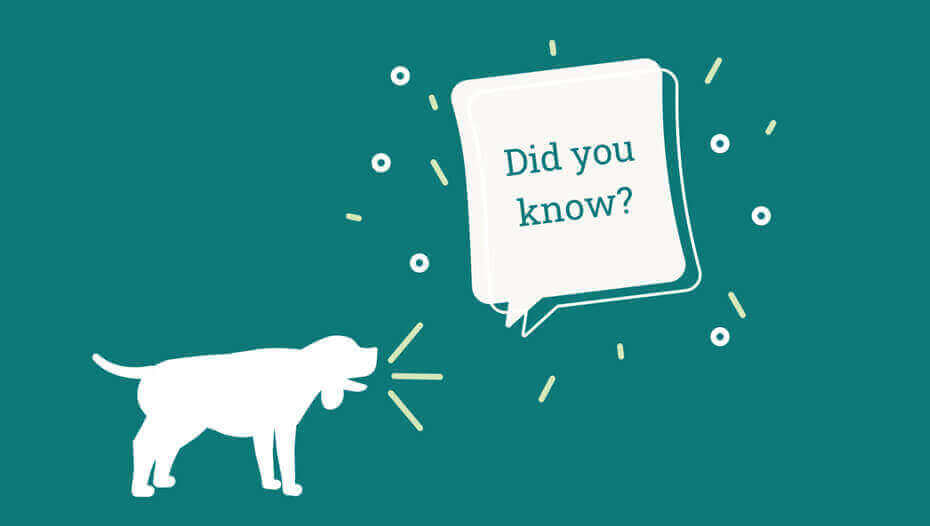